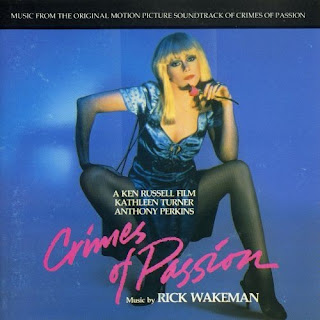 The 1984 erotic thriller "Crimes Of Passion" may not have turned many heads when it was released in movie theaters, but it's soundtrack has become a cult collectors dream. The movie revolves around human relationships and mental illness and starred Kathleen Turner and Anthony Perkins. As the film brought upon negative reviews, fans sought out the film's soundtrack, which was scored by Yes keyboardist Rick Wakeman. Now the soundtrack is being re-released on CD and includes a bonus track that features Maggie Bell on vocals. The mostly instrumental album begins with the eighties rock number "It's A Lovely Life" that features Swedish vocalist Maggie Bell, as she gives her all to this opening track. Wakeman works his magic on the songs "Eastern Shadows" and "The Stretch" and all their eighties glory. He delivers the blues with "Stax," before returning the energy of "Taken In Hand." The bonus track, "Dangerous Woman" has a pop/rock vibe that would climb up any eighties music chart. To find out more about this album, please visit rwcc.com.

Richard Christopher 'Rick' Wakeman (born 18 May 1949) is an English keyboard player and songwriter best known for being the former keyboardist in the progressive rock band Yes. He is also known for hi..

On this extraordinary album, legendary keyboard player teams up with an Italian singer named Mario Fasciano. Stavros Moschopoulos  writes: 'Recorded on the Isle of Man, the CD contains 8 new..

Richard Christopher 'Rick' Wakeman (born 18 May 1949) is an English keyboard player and songwriter best known for being the former keyboardist in the progressive rock band Yes. He is also known f..

Musician, producer and former Yes member Billy Sherwood has put together what he’s dubbed “the biggest super group of progressive rock players ever assembled,” to form ..

26 tracks in all, of which 10 are previously unreleased (these including an epic version of Matthew the Man - live in Tokyo 2001 and Beijing - widescreen remix from Iona, and other unreleased tra..