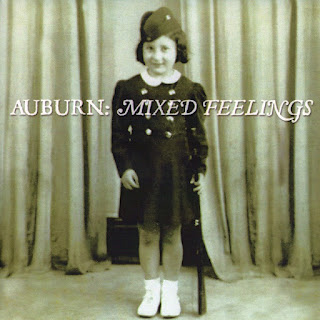 Over the years, KajaFax have followed with interest the resurgence of Liz Lenten and her rather special musical outfit ‘Auburn’. A friend of KajaFax, Liz has previously written and recorded with Kaja guitar supremo Steve Askew as a member of the ‘90s ‘Bolanesque’ group Baby Boomerang. If you missed any of those past articles, click HERE to review them.

Back with a new album and hot on the heels of last year’s excellent long player ‘Nashville’, Auburn again turn to Tennessee for inspiration with the release of their new album ‘Mixed Feelings’. An impassioned and involving collection – each of the twelve tracks take the listener through a journey into the writer’s diverse emotions – from friendship and love through to the grittier and maybe less traditional topics of stalking and domestic violence. Recorded in Nashville and produced by Thomm Jutz with a brace of top drawer country musicians on-board, ‘Mixed Feelings’ is a bluesy and versatile outing. One highlight that runs throughout the album is Jutz’ guitar work, which coupled with Justin Moses resonator fuelled strings provide the perfect counterpoint for Lenten’s smoky, expressive vocals (for strings done to perfection, try ‘Crystal Stairs’). For something more playful, try ‘Hell Hath No Fury’ – a song pumped with the energy only found in the music of the southern states of the USA…..a real highlight. ‘Mixed Feelings’ is precisely that – a very personal mix of traditional country, blues, folk…….pure Americana, Lenten style.

KajaFax have been privileged enough to see Auburn perform.

On the road again, catch them at the following venues: