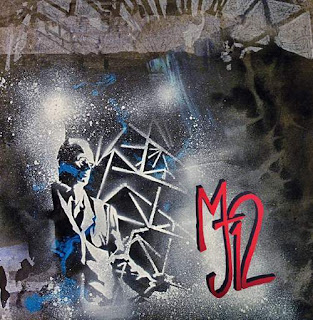 Named after Majestik 12 – an alleged scientific unit focusing on UFOs back in the late ’40s – or Percy Jones and Stephen Moses, this quartet can be seen as an American counterpart to the former’s most famous gig and the latter’s attempt to harness British quirk, as their objectives of marrying fusion to humor are very much defined. One doesn’t have to latch onto titles like “Guns And Pussy” to feel it: it’s all in the music, and once “Call 911” has sprinkled Jones’ fretless bass rumble with Moses’ cymbals’ stardust there’s no point in crying for help since the listener’s abduction is well underway, accompanied by a blare of Chris Bacas’ sax and Dave Phelps’ neighing guitar in a playfully suspenseful way. In this context, where police sirens add to overall urban sensation, pieces such as “The Wow Signal” shouldn’t surprise, yet they do because moulding motorik funk into elegy is a neat, elegant feat.
Equally surprising is a trad-jazz slant of “Talk Time” – a concise demonstration of the band’s telepathic interplay – and the ruminative appearance of the slider-oiled “Bad American Dream Pt. 2” blues, since “Pt. 24” saw the light of day when Percy had entered the scope of TUNNELS a few years ago, but the depth of this drift should be measured with two parts of “Magic Mist” which tugs a melancholy melody and cosmic skronk to an almost infrasound panorama. And whereas “Big Daddy Road” is a prog-rock march towards pleasures unknown, “The Phantom Maracas” is charting its route through menacing sonic space rather merrily just like, one would assume, aliens would when they want to amaze earthlings with their celestial shenanigans. In the case of MJ12, this first contact has been very much impressive.

Percy Jones (born December th, 1947 near Llandrindod Wells, Wales) is a Welsh bass guitarist, and was a member of jazz fusion band Brand X from 1974 to 1980, as well as a reformed version that lasted ..