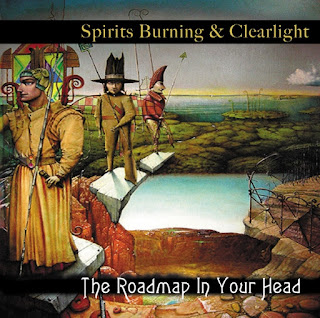 
London, UK - “The Roadmap In Your Head” is the 13th studio album from the Spirits Burning space rock collective, and the second to feature keyboardist Cyrille “Clearlight” Verdeaux. The album has a strong Gong presence, as it includes performances by four musicians from Gong's Radio Gnome Invisible Trilogy (Daevid Allen, Steve Hillage, Mike Howlett, Didier Malherbe), and four members of the current Gong (Ian East, Fabio Golfetti, Dave Sturt, Kavus Torabi). Clearlight is a project of French songwriter and composer Cyrille Verdeaux that blends classical romanticism and prog-rock experimentation. The first Clearlight album was released under the name “Clearlight Symphony,” in 1974, by British major label Virgin Records. The most recent release was 2015's “Impressionist Symphony.”
“Spirits Burning is a musical collective overseen by American composer/producer Don Falcone that has released a pluralistic combination of ambient, jazz and full-on space-rock with input from many of the genre's luminaries. Spirits Burning has become a respected melting pot of the space-rock fraternity.” Ian Abrahams, Rock N Reel, July-August, 2008.
Says founding member and band leader Don Falcone, “ 'Roadmap' is a musical journey from the beginning of one possible day to the next, touching different styles of music along the way. Like the previous Spirits Burning & Clearlight album, the songs are primarily instrumental. The new album is also a salute to Daevid and what he has meant to Spirits Burning, as he has been part of every release, except one.” Gong legend Daevid Allen, who sadly passed away in 2015, co-wrote two songs on this release. He sings on the closing track “Roadmaps,” and plays guitar on this track and the opening title track.
There are thirty-five musicians on Spirits Burning's “The Roadmap In Your Head.” Besides members of the Gong global family, there are some special new crewmembers: Paul Booth (who recorded his part while touring with Steve Winwood), Theo Travis (who has played with David Gilmour, Porcupine Tree, and Gong), Judy Dyble (who provided some autoharp flourishes), and Jonathan Segel from Camper Van Beethoven (who Don invited after discovering he was a Gong fan). Returning crewmembers include: Hawkwind family members Steve Bemand, Nik Turner, and Bridget Wishart, plus Albert Bouchard (BÖC). “The Roadmap In Your Head” was mastered by well known ambient recording artist Robert Rich.