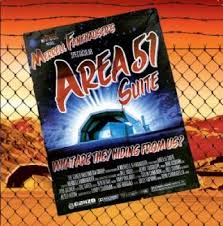 It has been several years since Merrell Fankhauser released new studio recordings (he has released several compilations and DVDs over the years as well). Rockin and Surfin was a 2004 release that I recall enjoying immensely so it came as no surprise that I had a similar experience listening to the latest release Area 51 Suite. Keep in mind music fans that Fankhauser has been getting it done in the recording studio since the 60s and has overcome health issues and every other obstacle thrown in his way to continue to entertain us all. There are two versions of the release available, the CD and the CD/DVD which features music videos and interviews with people from the ET and Sci-Fi community.

This collection of tracks is referred to as space pop. A lot of it as one would suspect if you are familiar with Fankhauser’s work, is influenced by surf. The subject matter is about space and extraterrestrials but I would classify most of this recording as instrumental with wide range of influences coming together at once to form this hybrid of the referenced “space pop.”

The first and title track “Area 51” effectively creates an air of mystery and intrigue. Certainly that was the intent so mission accomplished and a great way to open the curtain to the show. “Signals From Zoran’” which is also an excellent track, takes a page out the surf-instrumental book. The following track “Stardazed” is slower bluesy like ballad that puts you in a starry eyed mood and just may have you looking up at the sky wondering who is out there watching us. “Bimini Road” which is an underwater rock formation near North Bimini Island in the Bahamas, is very appropriately a surf-blues number that takes you on an underwater adventure. Instrumental music, if it is very good, takes little time to create a picture of the track title in your mind, here again Fankhauser succeeds.

“Shadow People” is a very picturesque instrumental that brings those people in the shadows to life. The music flows along and rocks its way into your psyche making it inevitable that you start thinking about unexplained phenomena and people on this earth that we have no knowledge of or why they are here. It one of the more complex and changing tracks that takes things to another musical level for the artist. Then to switch things up yet again “Cocktails In Space” is entirely different than all the previous tracks and it includes a segment where a flute comes in giving it new age feel and texture.

When “Crash Landing” comes at you with a synthesizer depicting a spacecraft coming your way and Merrell’s guitar kicks in it forms a spy thriller surf sound that keeps you hooked throughout. This track was the one that reminded a lot of his previous surf-instrumental work. Many of the tracks begin with a spacey laser or craft landing like sound to make sure you are staying with the overall Area 51 Suite theme.

The biggest treat for old and new fans will be Fankhauser’s most prolific track “Calling From A Star.” I go back to 1999 with Merrell and that is when I first heard this amazing track. The title says it all and his voice is exceptional, backed by perfectly placed instrumentation. I don’t think he could have recorded a better track in his long and influential career. Every track offers the listener something different and even though the premise is visitors from outer space you will hear the diversity of an artist on display at every turn. Surf, space, pop, rock, blues, and country, just about every main genre, gets superb coverage on this eclectic slice of musical excellence.

This is a solid release and I have to say one of Merrell Fankhauser’s most exceptional releases in his career. He has made some great music over the years and this gives us all a reminder once again of his importance to the history of rock music and how his capabilities to entertain have not waned. His candle is still burning brightly and Area 51 Suite gives you a one way ticket to the stars. Don’t you give up hope down there; they are coming back again…

For Questions Or Comments About This Review Send An Email To info@muzikreviews.com

CURRENTLY AVAILABLE AT GONZO
Posted by Jon Downes at 12:18