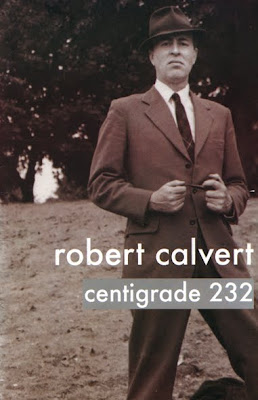 There is a new edition of Robert Calvert's seminal book of poetry Centigrade 232. How do I know? Because I designed and typeset it, my wife Corinna proofread it, and Graham and I went through and fixed some cock ups that had been there since a much earlier edition.

FROM THE ORIGINAL EDITION:

Robert Calvert was born in Pretoria, South Africa in 1944, but moved to
England at the age of two. He went to school in London and Margate, and later studied building technology at Canterbury Tech.

Always interested in the literary arts, he began writing and performing poetry around 1967, and in that year formed a street theatre group in London’s Chalk Farm, called ‘Street Dada Nihilismus’. Shortly afterwards he met up with
Britain’s premier space-rock band, Hawkwind, with whom he has now evolved from resident poet into lead singer. He co-composed the band’s hit single, Silver Machine, and directed their unforgettable Space Ritual stage show, appearing as poet and narrator. As well as recording with Hawkwind, he has also made two solo albums, Captain Lockheed and the Starfighters and Lucky Leif and the Longships.

More recently he has turned his wide talents to the theatre, Stars that Play with Laughing Sam’s Dice, his play about Jimi Hendrix, was staged by the
Pentameters Theatre in 1976, and he has since written a full-length stage play scheduled for production in the Spring of 1976.