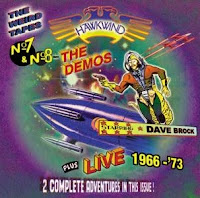 Both these disks, previously on sale individually, are proto-Hawkwind, but in two very different ways. The first disk is early 1980s Brock material that became Hawkwind stuff later on, whereas the second disk reflects Dave Brock's activities prior to Hawkwind, mixed up with some very early Hawkwind.

The opener, 'Choose Your Masques', is preceded by the introductory dialog of the 1960s TV show, 'The Outer Limits'. Somewhat similar to 'The Twilight Zone', its Control Voice intones: 'Do not attempt to adjust your picture. We are controlling transmission. If we wish to make it louder, we will bring up the volume. If we wish to make it softer, we will tune it to a whisper.'

Since this is Brock rather than Hawkwind, the customary drumming and bass guitar is replaced by drum machine and / or keyboard rhythm. That's not to say the tracks are lacking anything, though. 'Masques' has a very grungy and dense feel, due to Brock's fuzzy guitar churning relentlessly away, and it's a good album opener, especially with the Control Voice preamble.

Brock has a tendency to vary his vocal processing a lot more when solo than with Hawkwind; and here, all the way through to a dalek... except this dalek speaks of 'turning star projections' rather than extermination.

Moving on, some of the tracks or ideas for tracks ended up on the 'Church of Hawkwind' album, and 'Circles' was wholly revamped for the 'Levitation' album – the track being rebranded as 'Fifth Second of Forever.

I've always been fond of the 'Circles' track, whatever it might happen to be called at the time - ever since I first heard it on Weird 3, back in 1981. The instrumentation originally was from a Watchfield Festival jam during 'Magnu' but here on Weird 7 it's had another total makeover and is done in a 1978 Hawklords / 'Douglas in the Jungle' kind of style.

Talking of 'Magnu': if the musical DNA of the 'Streets of Fear' riff was subjected to a parenthood test, 'Magnu' would receive a bloody large bill for child maintenance!

Finally, 'Looking In The Future' (aka 'Letting in the Past') is a not-very-well-known Hawkwind number that gets an embryonic run-out here.

Before turning to disk 2, a word about the appearance of this twofer.

It seems odd to be mentioning the absent track 'Douglas in the Jungle' twice in one review, but 'Live and Let Live' really is a dead ringer for it. However, it's very early Hawkwind, as is 'Down On Her Knees' – and the latter reminds me a lot of 'Paradox', a classic track from much later on.... 1974!

There's also what sound like audience recordings (in mono) of early versions of 'You Know You're only Dreaming' and 'You Shouldn't Do That' which are both performed in the 'In Search of Space' tempo and style.

Other tracks are from the pre-Hawkwind group, the Dharma Blues Band, and include the jaunty blues song 'Come On' with harmonica and honky-tonk piano well to the fore. For those wondering how the heck Hawkwind was born out of that band, 'Dealing with the Devil' goes some way to explaining it: after some fairly standard bluesy / rock 'n' roll stuff, it starts going grunge-grunge-grunge-grunge in a riffy and headbanging early Status Quo manner, with distorted harmonica twirling away.

Given the embryonic remit of both disks, albeit in different ways as I mentioned earlier, this pairing is probably for the diehard Hawkwind fan, rather than the casual punter looking to dip their toes in the water and get their first Hawkwind record.

To people in the latter category, I'd say buy the mainstream stuff first... and get to know it.... and then come back to this re-release.

(release details and ordering)
Posted by Graham Inglis at 11:28