PLEASE ALLOW ME TO INTRODUCE MYSELF 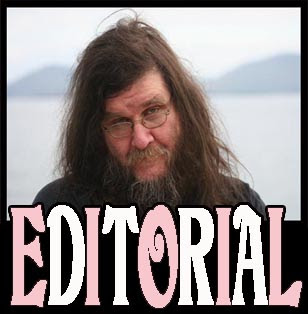 If you have been following the old Gonzo blog, ably edited by our friend Jon Kirkman, then you will probably be wondering who the hell I am, and what the blazes I am doing here.

Well, my name's Jon, and I am probably better known as "That fat weird bloke off the telly who believes in vampires". Well, as well as believing in vampires (which I do, by the way, but that is an entirely different story) I have been writing about music for even longer than I have been writing about things that go bump in the night. The only difference being that most of the time no-one much read what I had to say. Even less people bought my records (which is one of the reasons that I became a writer in the first place), but music never stopped being very important to me.

Yes, I admit it. I was one of those deluded souls who truly believed that sitting in muddy fields in the rain listening to a bunch of grown men making whooshing noises on synthesisers was somehow going to change the world! I'm still not sure that it won't.

About a quarter of a century ago when I was editing a small-press fanzine that no-one much read, I met a bloke called Rob Ayling. The main thing that we had in common was that we both took music far too seriously, but that was enough, and we soon became firm friends. He and I both had dreams; I was going to travel the earth in search of monsters, and he was going to start a record label for the delectation of those people who also take music far too seriously. Twenty-five years on, we have both realised our ambitions, and what other two disparate middle-aged men can claim that?

Now, twenty-five years on from our first meeting at a Daevid Allen concert in Exeter Arts Centre, we are collaborating again. Rob decided that although
I had never stopped taking music far too seriously, it was time that I started to write about it again. I won't ever argue with Rob - he is from Yorkshire, so I gathered a few like-minded folk around me, we girded our loins, and set to work.

So here we are, at the beginning of a brave new adventure. We are going to do our best to make this a daily thing, and we hope that you will join us. C'mon guys; it is time to see the world through the eyes of a bunch of middle-aged weirdos who still have a sneaking suspicion that music can change the world!
Posted by Jon Downes at 21:36