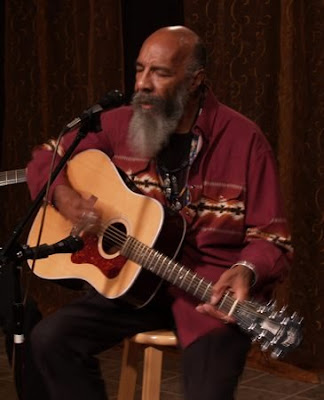 Like most people of my generation (I am 52, and feeling every day of it) I first encountered Richie Havens as the opening act of Woodstock. Not thatI was amongst the throng at Yasgur's Farm, but I saw the movie at a late night showing with Easy Rider at an art event at Exeter University in the summer of 1977.

I was always quite impressed with his signature strummety strum polyrhythms, and whilst I will be the first to admit that he may be an acquired taste, the same can be said about most of the artists I like.

I was intrigued, therefore, to find that there was a Richie Havens DVD as part of the Gonzo 'Lost Broadcasts' series. Most of the songs were familiar to me, although I had never heard him do them. My two favourites are CSN's Teach Your Children and James Taylor's Fire and Rain both of which acquire a strange funky spiritualness about them. Somehow you feel like you have been transported into some weird voodoo cathedral, and I found myself hearing all sorts of imaginary orchestration that only existed in my head. I haven't felt like that in a long time. Wow...
_______________________________________________________ 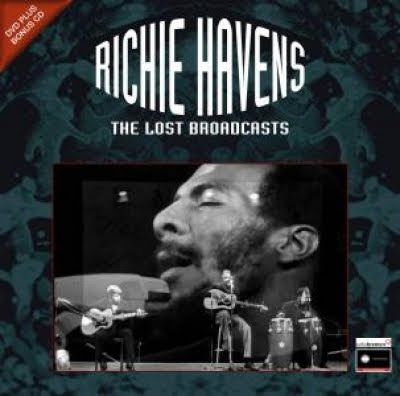 The Lost Broadcasts are a series of Audio and Visual CD/DVD sets featuring performances that have rarely been seen since the original transmission on German television, in some cases more than forty years ago. Some of the artists featured within the series are legendary and these "Lost" performances will be a fine addition to any music fans collection. The series covers a number of styles and genres however all of the performances are of a high calibre

Richie Havens is an American folk artist and was the opening act at the now legendary Woodstock festival in August 1969. Although a respected artist noted for his fast and somewhat unorthodox guitar style Richie Havens had been making waves in music circles since the mid sixties and his reputation had spread further following his record deal with Verve records in 1967 and the release of his debut album for the label Mixed Bag. By the time of the Woodstock festival in August 1969 Richie Havens had released two more albums; Something Else Again in 1968 and the double album Richard P Havens 1983. Further successful albums followed in the seventies and Richie Havens continues to tour and release albums on a regular basis.

The sessions featured on this CD/DVD package are drawn from June 1969 through to late October 1971. From the earliest sessions just before the Woodstock festival Havens performs two versions of the Beatles song Lady Madonna and Just Above My Hobby Horses Head both tracks from the Richard P Havens 1983 album. Moving forward to October 1971 we have three versions of the George Harrison song Here Comes The Sun which was a featured track on his then current album Alarm Clock. Two other songs come from this session. Teach Your Children and another cover this time a cover of the James Taylor song Fire and Rain. The final song comes from a session filmed almost a month later at the end of October and is another take on the George Harrison song Here Comes The Sun.