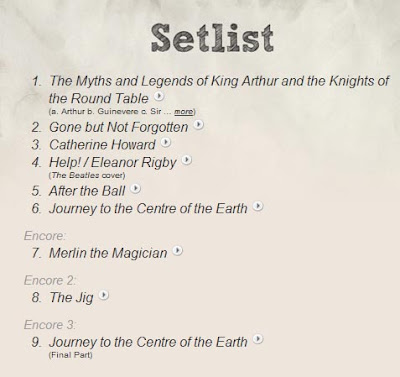 I was mildly impressed that there is an entire website set up devoted to reposting set lists, but then again I am always impressed when someone does something spectacularly trivial within a rock music context. Here you can see the set list from a gig in Argentina late last year, and if - like me - you have never really grown out of being a teenage space cadet, even well into the years of your prime, you are going to spend hour here, just footling about.

Anyway I am in the mood for Rick Wakeman at the moment. Not only have I been working on new issues of his autobiography, and the all singing all dancing 1978 biography by Dan Wooding, but these literary endavours have led me to spotify his albums, and - to my mild embarrassment - I had forgotten how good they are. Even Prudence (the massively unintelligent bulldog/boxer bitch who spends most of her life snoozing on the sofa) seems to like it.

So both Prudence and I are looking forward to the release of a new live album next week:

Rick Wakeman releases his latest album - an archive live album entitled "In The Nick Of Time" on the 19th of March.

The album was recorded in 2003 during an extensive British tour with the New English Rock Ensemble. The album is a single disc and contains 7 tracks including: Catherine Parr/Beware Your Enemies, No Earthly Connection,White Rock and Wurm which as many will know is a track originally found on The Yes Album as part of Starship Trooper.

In The Nick Of Time has long been anticipated by the large and dedicated Rick Wakeman fan base and the tour from which the album was sourced was one of Rick's most extensive and successful tours to date.

I am confident that my stepdaughter Olivia will sniff disdainfully at it, and give me the withering glanse that she always gives when she thinks that her darling stepfather is actually a tedious old hippy. But her favourite band is Slipknot, and whilst I know that Rick W has tried some extravagant new musical adventures in his time...

Email ThisBlogThis!Share to TwitterShare to FacebookShare to Pinterest
Labels: in the nick of time, live album, Rick Wakeman, Yes