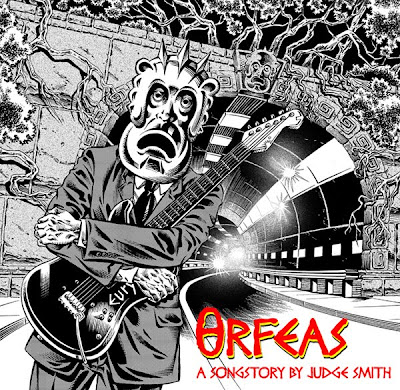 We sat down to listen to it last night, and although I know vaguely what I was expecting, but what we got was nothing like it.

For one thing I didn't expect it to be so enjoyable. I was expecting a piece of heavy Art with a capital A, but what we got was definitely well crafted, artostically valid, yadda yadda yadda, but it was also really entertaining and good fun.

It tells the story of George Orpheus, a rock guitarist of a certain age, whose career is dependent on his artistry on a magickal guitar called Eurydice (which he completely misunderstands, misreading it as "Furry Dice"). It transpires that Eurydice is actually his muse (no, not a three piece rock band from Teignmouth, that would have a capital M, duh!) and the magick guitar was her way of communicating her creative spirit into the engagingly numb skull of George O.

When George O turns his back on his creativity, disaster strikes....

One of the most striking things about the album is the way that Judge Smith uses a singular technique that I had not come across before:

"Speech-music involves taking a recording of a spoken voice, and then setting that recording to music; a music that closely follows the rhythm of the spoken words and the natural rise and fall of the speaker’s voice. This rather demanding and arduous technique was first heard in the 1980s, in the work of a small number ofcomposers and performers, all from the Americas. These include Scott Johnson, Hermeto Pascoal, and Steve Reich, while more recently René Lussier and Charles Spearin have continued to develop the idea. But perhaps the most accomplished speech- music practitioner to have emerged is another American, David Minnick,whom I was lucky enough to involve in the Orfeas project. My own initial experiments in the field can be heard on the 2007 L-RAD album Long Range Audio Device, and my only minor claim to originality in using the technique is that I believe I mightbe the first composer to use 'acted' or deliberately performed speech to generate the music, as opposed to documentary recordings of one kind or another".
Posted by Jon Downes at 15:04