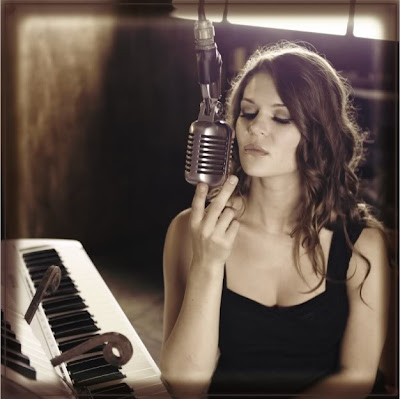 “My Vanilla Sky” employs a somewhat droney background with sparse keys, otherworldly atmospherics and orchestral flourishes as Page’s unbelievable vocals guide you through what feels like the most languid dream you’ve ever had.” - Brian Palmer - Glide Magazine

“Throughout the course of this EP’s (Lullaby For The Lonely) six songs: you hang on every word, relish every vocal and let the echoing, otherworldly sounds wrap their arms around you in an embrace you don’t want to be freed from.” - StereoSubversion.com

Los Angeles based Mimi Page has been writing music since she was five years old. The pretty, ebullient, piano girl hails from a family of classically trained musicians and has a gift for arranging and writing and also producing. While every recording you hear on her EPs 'A Lullaby For The Lonely' and 'Fire', including the track “This Fire”, which went viral and debuted on MTV’s 'The Real World' and subsequently placed number 11 on iTunes worldwide for “Best Electronic Single”, has been produced and engineered in Page’s own apartment. For her new album 'Breathe Me In', Page turned to veteran producer/engineer Warren Huart and Swing House Recording to further develop her sound. Page comments: “There’s only so much you can do in your own apartment. When my songs hit the airways and I started licensing to film and television, I realized that I needed to take my production elements to the next level. Warren has an incredible track record for producing piano-driven artists such as the Fray and I knew he could take me where I needed to go. He understood my sound.”

“I worked with the Fray, James Blunt, and am about to go work with Aerosmith and I love that like these consummate professionals Mimi is also a proactive artist. I love that she’s self-reliant and always writing new music…what is paramount for me, however is the song, the song is the key…Mimi’s songs are like soundscapes, or emotional statements and that makes it exciting,” says Huart. It should come as no surprise that Page is in demand. She has collaborated and performed with some of the top rising producers of the Electronic Bass Music community including Goldrush, Gladkill, Phrenik, Elfkowitz and ill-Gates. Page is gearing up for the upcoming
tour starting mid-March where she will open for Jefferson Starship as part of Paul Kantner’s Jefferson Starship All-Star Gala and will also headline some shows. Though technically considered down-tempo, electronic, dream-pop, Page’s personal taste and range in music is incredibly eclectic - she also covers Joy Division and Chris Isaak - but it is her ethereal voice, melodic orchestral arrangements and thought provoking lyrics that will leave you yearning for more.