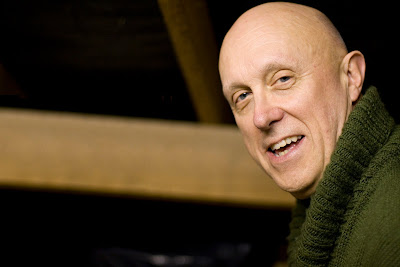 I have been interviewing people for a long time, and there are some who are better interviewees than others, but the rarest (and most valuable, to my way of thinking) interviewee is the one, with whom you immediately have a rapport, and find yourself talking with so naturally that you forget that you are doing an interview with them.

It turned out that we had quite a few interests in common. He is a reader of Fortean Times, a magazine that I have written for over the years, and even has a copy of On the Track of Unknown Animals by Bernard Heuvelmans (he pronounced it correctly, “Hoy-vel-mans” rather than “Hugh-vel-mans”) which, as my day job is the Director of the world’s largest cryptozoological organisation, is quite a coincidence.

“I did a musical called The Ascent of Wilberforce 3. a mountaineering musical which had a singing yeti in it”, he told me.

(For those of you who need to know such things, it was done at the Travis Theatre in Edinburgh and the Lyric, Hammersmith in 1978ish.)
So the interview just started, without either of us actually realising it…

Jon: How did the idea of the song stories come about?

Judge: Well I was always concerned about telling stories with music. I’ve always liked the idea of that. My regular song lyrics tend to be story lyrics when I’ve written an individual song there does tend to be a story in them, and I was also at that time or starting doing rock music at the time that the idea was current for rock music to do more than just do a three minute song. The long song started to become a possibility and this was something that Peter Hammill was interested in. So we were both starting off at that point so the idea of doing a long piece or longer pieces and the idea of telling stories sort of came together.

In the mid-70s, I started to write a song cycle. Supposedly it was going to be an album called The Kibbo Kift about a breakaway movement from the boy scouts. This was a factual thing, a factual subject, and well worth a look on the internet...

So I did just that, and found - to my amazement - that (once again) there were paralells to the things that I have been doing over the years. According to the Wikipedia article on the movement it had been inspired in part by the woodcraft laid down in the books of Ernest Thompson Seton, someone whom I had researched many years ago during my work on singing mice. This is true. Honest! You couldn't make stuff like this up!

I found this was a fascinating bit of history, and this was going to be a song cycle, like a concept album only we played it to Chris Parr, a theatre director, and he was very keen to put it on the stage. So we turned it into a musical. Still in exactly the same format, we merely staged it. This was done at the Travis theatre, the Edinburgh Festival and also at the Lyric, Hammersmith the following year, (1976). And this started myself and my songwriter at the time, Maxwell Hutchinson, on a series of stage musicals of different kinds.

One of these was pretty traditional, and didn’t actually get produced (traditional being where there is talking and then there is a song). Others which were more like operas, and eventually I became disenchanted with doing things in the theatre because it is just so difficult to get right – it is so difficult to get singing actors, well it was at the time, and it’s very difficult to make a good job of these shows with the kind of budgets that were available in subsidised theatre, to do a good musical show costs a great deal of money and I became disillusioned as to how well it was possible to do these things. How long they take to do and get on is unbelievable.

So I stopped doing those after a show called Mata Hari that I wrote with Lene Lovich, and that was the last stage musical I wanted to be involved with. But I still like the idea of telling a full length story with music so I evolved this sort of hybrid musical form which I call song story, or rather, John Ellis my guitar playing friend, named it song story. 'Cos I said what the hell am I going to call these things and he said call them song stories.

Judge: It does what it says on the tin

Jon: The nearest that I’ve ever come to what you do with the song stories is the radio plays that Pete Townsend has done a couple of times. I don’t know if you heard the radio play he did of Lifehouse back, I think, for the Millennium Eve for the BBC

Judge: I remember reading about them. No, I have never heard it. He’s a clever chap, I’m sure they would be excellent. I ought to check those out. Well Tommy was a prototype in the genre...

For those of you interested, the radio play can be found as the last CD in the 6 CD Lifehouse Chronicles box set, which costs an insane amount of money. I also recommend the 1993 CD Psychoderelict which is another musical radio play..

Judge: If you are going to a song, then a song, then a song etc., it is incredible difficult to tell a story. It would take 8 or 9 hours before you can get a story done in that format. The format is very limiting you have got to be able to split things up. Do a musical where you can have short passages, short bits, things that don’t form themselves into a song, and you have got to be able to put those things together. Then you can start to convey a narrative. I have tried to do it just with songs - it is incredibly difficult. That’s how The Kibbo Kift, the first one, worked it was a series of songs but it was very hard to do and make sense and carry the whole narrative through.

This is the problems that leads to things like War of the Worlds where you have to have a narrator speaking in order to fill in the gaps. Not that there is anything wrong with that, but it is not doing the whole job with words and music.

Jon: In Orfeas you actually went through a very, very old, in fact an ancient tradition, and had a 'chorus' didn’t you?

A Greek chorus (Greek: χορός, khoros) is a homogeneous, non-individualised group of performers in the plays of Classical Greece who comment with a collective voice on the dramatic action. The concept was taken by Shakespeare in Henry V with a single 'Chorus' who provided a commentary to what was going on.

Judge: Yes. I fancied the idea of trying to maintain some sort of contact with the idea of this story of an ancient myth, and my friend David Shaw Parker, who is an actor and what he calls a Mediterranean guitar player, in other words flamenco influenced acoustic guitarist, and a good singer, and a very funny man. I thought great, he wanted to be involved, so I created this idea of the bard for him to do, which is how a lot of my things tend to happen. I know who is available and who wants to be involved in a project, and then I work out how to use the stuff they do in order to tell my story.

Jon: Well, if the truth were known, probably Aristophanes or whoever it was who used that style first probably did exactly the same thing. There was some mate of his just down the road who played the lute he thought would be perfect for the part

Judge: Absolutely. Well it is, not wishing to be portentous, but the stories were originally sung in the great tradition the Greek epics were designed to be sung, Beowulf would have been sung to a harp or whatever, and so there is nothing new about binding a story with music and of course it has led to opera and so on, but it is a slightly different thing....

And there we must leave you for today. I would like to thank my lovely wife Corinna for transcribing the interview which is going to run over either two or three parts, and also - of course - to Judge, for being such an interesting and lively interviewee.

Whilst on the subject, why not check out Judge's Gonzo Artist page, with details of his CDs for sale through the company: