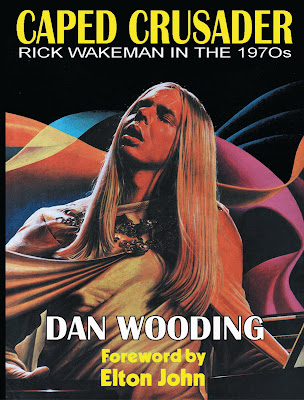 As regular readers will know, Dan Woodings extraordinary look at the life of Rick Wakeman in the 1970s will be out within the next couple of weeks. However, the other day I posted a section about Rick Wakeman playing on the 1969 sessions for David Bowie's Space Oddity.

Here, in an extract from Wakeman's own autobiography, is the story of what happened a couple of years later...

I had already decided to quit Strawbs purely for financial reasons and to return to doing sessions full time where I knew I could make four times as much money on a regular basis. Then came the two telephone calls that were to shape the next stage of my musical career. The first came from David Bowie. He asked me to meet him that evening at a club in Hampstead to discuss a proposition he had for me. David was doing a surprise performance at the club with just himself and Mick Ronson on guitar. David was dressed in the most wild outfit I had ever seen, which included giant blue feathers protruding from a Tiller-girl style headdress.

After David’s performance, which completely freaked the audience out, he came and sat down with me at a private table near the bar.

"I’m forming a band which I’m going to call ‘Spiders from Mars’," he began, "and I’m going to become Ziggy Stardust. I want you to be part of the band and be responsible for the arrangements as well. You can have a lot of freedom and the money will be good as my management are in the middle of negotiating for an album and a world tour."

I was flattered beyond belief. Here was an opportunity to stay out on the road, which I really enjoyed, and earn enough to pay the mortgage at the same time! David told me to spend a couple of days thinking about it and then to call him. I told David there and then that it sounded great and I really fancied the whole idea, but David insisted I took my time over the decision.

The following night, or three o’clock in the morning to be precise, the telephone rang with the other call. This one was from Chris Squire of Yes. We had met once before when Strawbs had supported Yes at a gig in Hull. I remember staying to hear their set and being intrigued by their sound, which was totally different from anything else around at the time. They also looked different, almost wrong in fact.

Most bands at that time had lead singers who were tall and had deep throaty voices. Jon Anderson was diminutive and had a pure adult falsetto. Bass players, with the exception of John Entwhistle of The Who, were pretty much backroom boys. Not so Chris Squire, whose treble-sounding bass played as melodic bass lines as I had ever heard. Bill Bruford seemed very composed on the drums as against the usual drummer who normally sat in a pile of sweat, and Steve Howe was the First guitarist I had heard for a long time that didn’t sound like Eric Clapton. Perhaps the only area that came across as standard was that of Tony Kaye on the organ, who in fairness was not given a leading role within the music.

To this day I vividly remember the opening of the conversation with Chris. I had not got home from a late session until about two o’clock that morning and had to be up at seven to get into London. I was in a deep sleep when the ‘phone rang.

I picked up the phone and struggled to pull myself up into a sitting position.

“Oh, hello, this is Chris Squire. We have met once before, up in Hull if you remember. Anyway, we’ve just returned today from our first American tour and we’ve come to the conclusion that we want to move more into orchestral keyboards and, having read some of your interviews and heard you play, feel that you are the perfect musician to help us both achieve our joint aims. What do you think‘?"

"Shall I call you back tomorrow, then?"

And that ended the conversation.

I got back home the following day about six o’clock in the evening. There were four messages from Chris Squire to call him and also a couple from the manager of Yes, Brian Lane. I spoke to Chris, who said that Brian wanted to arrange a meeting up at their offices, in South Street in the heart of Mayfair. I called Brian first thing the following morning and a meeting was set up at which I met up with both Jon and Chris. We arranged to have a rehearsal the next day to see if we fitted in together. I felt there was nothing to lose by this and arrived at the rehearsal room at the duly arranged time.

At that rehearsal we pretty much composed "Roundabout" and "Heart of the Sunrise". I was over the moon. The standard of musicianship was phenomenal and I knew this band wanted to go places, and I wanted to go with them. I arrived back home thinking about how I was going to tell Strawbs what I wanted to do, and found myself with another problem awaiting my return. It came in the form of a message from David Bowie’s office, asking for confirmation that I would be fronting Spiders from Mars.

I spent the evening in the Apollo public house at the end of the road trying to decide what to do about my dilemmas.

First I had to choose between Yes and Bowie. I chose Yes, simply because I would be an equal member of the band with equal opportunities, plus the fact that the music we had come up with at that day’s rehearsal was stupendous. With David, I would always be a member of his band and much as I loved working with him I realised that there was only so far I could go along that route. The next day I phoned David and told him personally of my decision. He wished me much success and we have remained friends ever since. There is no doubt that I learned much from working with him and thoroughly enjoyed reminiscing with him the last time we worked together, on Absolute Beginners.
Posted by Jon Downes at 20:14