REVIEW: At School with a Serial Killer 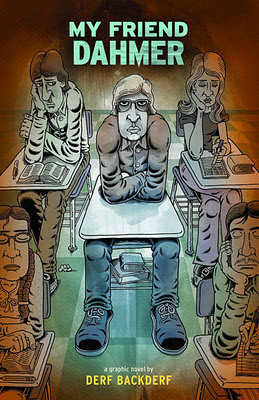 As regular readers of this blog will know, although the vast majority of what we cover is at least vaguely relevant to the releases on the Gonzo Multimedia group of companies, there are some things – mostly book reviews – that are included because I think they are interesting. Here, as always, I would like to say that any opinions expressed are my own and have nothing to do with any of those nice people at Gonzo Multimedia.

When I first heard about this – a graphic novel based upon the relationships between the author – Derf Backderf – and the notorious serial killer Jeffrey Dahmer I had to contact the publishers for a copy. Why? Well believe it or not, it is not for any reason of prurience. It is just because I am fascinated with the idea that extreme things whether joyful or ugly, good or evil, happen to normal people, and within ordinary society.

For example, a woman I knew vaguely about ten years ago told me that she had been working in an office at the end of the 1970s, where her closest friend was a quiet, and utterly charming man called Dennis Nilsen. They had eaten their lunch together, gone out for walks together, and he had even done her hair. She was utterly dumbfounded when he turned out to be a notorious serial killer, and I believe cannibal.

An ex-girlfriend of mine had once been friends with Myra Hindley, and someone who I know reads this blog lost one of her best friends to the Manson family. So, in the midst of life we are indeed in death, or whatever it is that it says in the Book of Common Prayer.

The book didn’t disappoint me. In many ways it reminded me of my own school days. Not that I, or as far as I know any of my schoolfriends, turned into monsters, but from what I can gather from talking to kids who are at school today, schooldays in the 1970s were far weirder, far bleaker and far more disturbing than they are today. The relationship between Dahmer and the author was a complex one, and possibly the most important thing that the book describes is, as Chuck Klosterman says in the notes on the back cover “what it means to be friends with someone you don’t really like” and an object lesson to all of us about how we, as individuals and en masse, have a tendency to ignore things which are staring at us in the face, purely because we don‘t want to confront them.

Possibly the most disturbing incident in the whole book occurs on the last page, when the author’s wife telephoned him one day saying “this guy in Wisconsin killed a bunch of people! His apartment was full of bodies! He had sex with the corpses ..... and ate some of them!!” and went on to tell the author that this guy had been in the same class as him at school, whereupon the author trying to guess which of his erstwhile classmates had turned into such a complete, and utter monster of depravity guessed wrong.

We really do not know more than the most superficial facade of most of the people who we come across during our lives.

What is the most surprising thing about this book is the way that the author has managed to be completely objective about the incidents that he portrays, but always manages to retain his moral objectivity. “There are a surprising number out there who view Jeffrey Dahmer as some kind of anti-hero, a bullied kid who lashed back at the society that rejected him. This is nonsense. Dahmer was a twisted wretch whose depravity was almost beyond comprehension. Pity him, but don’t emphasise with him”.

This is a remarkable book, and unusually for something which I got hold of on impulse, and out of curiosity, I think that I shall be re-reading it, and almost certainly getting something new out of it each time that I do so. Although not a pleasant read by any stretch of the imagination, it is a compulsive one, and one that I have no hesitation in recommending.
Posted by Jon Downes at 20:58