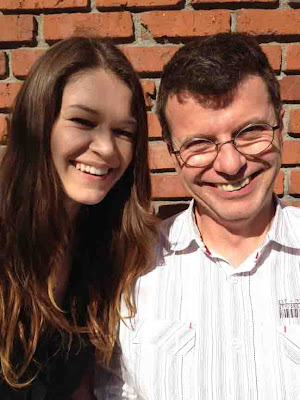 Yesterday we posted part one of our interview with Mimi Page (seen here with Gonzoboss Rob) in which we talked about dogs, her new album, and various other things. Today we post the concluding part:

Jon: Well I think it is a really good album. I am really impressed by it. What’s your favourite track?

Jon: I know, it’s a horrible question that isn’t it?

Mimi: It depends on my mood, because every single one of my songs has a whole life to it. They are all stories within themselves, and they were all different parts of my life and people that I have known at one time or another, so depending on my mood. I love The Starving Artist, which is track..8 I believe, which kind of is more of a soundscape, it’s not really a pop song, it’s a bunch of harmonies and a theme but the lyrics are about, you know, not giving up and keep on singing, even if nobody is listening until everybody kind of realises, you know, this girl’s ok. ‘Cos you know I used to sing a lot of local LA bars and people, you know, it’s a dream pop, it’s a weird genre not a rock band so a lot of people either didn’t get it or it’s hard to quiet a room with such a melodic down tempo sound so I kinda wrote that for a place of wanting people to just listen to me. Each time I sing it now, and I do have an audience and I opened with ‘Jefferson Starship’ and I sing that and I was singing that for like 500 people and everybody was listening, it is just such an emotional track to sing so it’s probably my favourite one.

Jon: I have seen some stills from your ‘Black Valentine’ video and you’re standing on top of a castle looking very gothic. So tell me about the video, what’s the story? I want to know how come the girl who sings ‘The Starving Artist’ ends up standing on top of a castle looking gothic. It’s just a bit far out for me. I just want to see how it works.

Mimi: Well, like I said every one of my songs has a life of its own, and ‘Black Valentine’ probably is my second favourite on the album if not maybe my favourite....it depends on my mood really, but ‘Black Valentine’ is about the darkness that lives in all of us.

You know, all of us I feel are a balance between light and dark, and that kind of struggle within, biblically and everywhere, you know from the beginning of time, like light and dark are equal.

‘Black Valentine’, it’s kind of like, it’s the video’s struggle that darkness that takes over me and me fighting it off and, I don’t know, it’s ... I wrote the song in my apartment, but in my mind I had an alternate reality and it’s like, you know, this girl, the story of this girl who lives in this castle and has this huge kind of Edward Scissorhands-like studio with keyboards, and synthesisers and knobs. As you’ll see in the video, it’s this huge room of equipment where I’m creating the noises and the sounds , and it’s very industrial sounding. And then, like she writes it and then she goes and she’s fighting off the darkness. It’s like a whole battle so you kinda just see within her mind what’s going on and you don’t really know where she is exactly, you just see she is in this castle and she’s creating all these noises and stuff, and what’s going on.

Jon: I can’t wait to see it. It sounds brilliant.

Mimi: Oh thank you. I think we finis filming the remaining shots this Friday. It’s just surprisingly me and one director. We don’t have a crew or anything. We’re just combining our own brains.

He has an amazing lot, where he’s filmed a web series, which I actually met him for. I used to write the music and compose for his web series called ‘Tyranny’, it’s a sci-fi thriller. His name is John Hofmann and he goes by Silas Funk, and he actually is a videographer for NASA here in the US, so he travels all around the world videotaping ... shuttle launches and everything NASA’s doing.

He’s actually documenting the landing on Mars and all of that right now. So in between that he has this whole web series that he has written for years and he has all the stock footage and he’s been to Rome, and he‘s been to Egypt and all these places so what we did, we used a green screen and we superimposed me in all these different amazing places he shot, and this is all on his lot. And then I would come up with ideas, you know, what the dress should look like and so we had like wind machines and had me in kind of different areas, like I remember walking in one scene down on this bridge, I think it’s in London, I’m not sure, but it’s absolutely amazing what we’ve done, just the two of us drinking coffee in his lot, you know, creating this whole world. So it’s a beautiful, beautiful, I think, visual to the song. It completes the song.

Jon: It sounds absolutely wonderful, I can’t wait to see it. Can we do this again soon and keep regular updates for the blog?

Mimi: That sounds fantastic, I’d love to do that.

And so it was over. Mimi is a charming young lady, and I think that with a bit of luck and a fair wind she will go far, and I hope that the Gonzo Blog will be along for the ride, to see what happens...
Posted by Jon Downes at 10:24