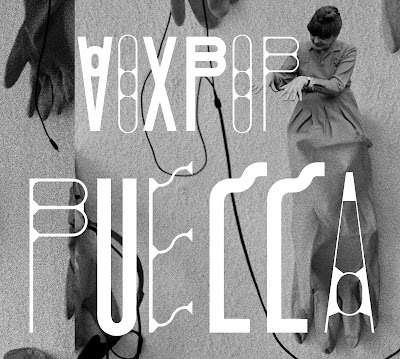 Well the whole thing was supposed to tie in with Helen's new limited edition electronica album, Voxpop Puella, which is only available through http://mccookerybook.blogspot.co.uk/ but, as always happens when Helen and I start chatting, the whole thing got out of hand and will be run over the four days.

Today is the third, (you can read part one HERE , part two HERE, and part three HERE) I hope that you enjoy it as much as I did. We finish off talking about Helen's friend and co-conspirator Acton Bell...

JON: One last question before I disappear, because as always I end up talking to you far longer than I ought to and take up far too much of your time as we just chit chat.  But you’ve mentioned the name Acton Bell a couple of times. I’ve also seen her on your website.  Who is she?

HELEN: She’s a singer/songwriter from and she’s a real character actually.  She’s got a lovely voice and she started off ... I met her at some singer/songwriter night and she started off singing Searchers songs and Herman’s Hermits and that kind of thing. And people absolutely love her because they can all sing along with her songs. But this is her actually singing her own songs, which are actually really good songs.  She’s a very good songwriter and one of the things that she does is, she goes and sings songs in old people’s homes, which I think is really sweet. She’s a real one-off.

I went to see her play – she was doing a show in a vintage clothing store in East London – very trendy East London – and at about 6 o’clock they cleared away all the rails of vintage clothes and set up a stage in their window and lots and lots of really trendy people came with their laptops and all that kind of thing, but they were absolutely open-mouthed when they saw her, because she’s totally authentic, there’s no kind of fake style or anything like that.  She just gets up and sings in quite a broad accent.. she sings a kind of <sings> "...There’s a kind of hooosh... " but all these really trendy people just couldn’t make it out and then by the time she had finished her set, they absolutely loved her.

And I do quite a lot of gigs with her because I really like her, she’s a really good friend, and actually she came for tea in the summer and Martin was staying and he made some recordings, so we started making recordings of her songs – she’s got a lovely, lovely voice. Like I say, she’s quite an unusual person and I love doing gigs with her and so it’s nice to do Club Artyfartle with her, and what happens is I choose one act so Lucy Seger is my act, and I have been working with her on her songs a little bit, and Magnetic Paul is Acton Bell’s act so we are introducing people to the audience at the same time, you know.

JON: Sounds absolutely lovely, I wish I was there

HELEN: Well I wish you were too, I think you would really enjoy it.

JON: Trouble is I’m fairly disabled and live in in the middle of nowhere.

HELEN: I wonder if we could get somebody to film...the trouble with filming it is then you get into a film which is not a....

JON: I was just thinking I would love to film it. Because I am a totally anarchic film-maker, I’m not a theatrical lovey at all ...  Has Acton Bell got any albums out?

HELEN: No she hasn’t. She’s got a MySpace which is /actonbelle.  I think it would be lovely if she did....we’ve recorded these two songs and I’ve got a suspicion that we are gradually building up an album for her. She hasn’t got any money at all. She’d been working as a cleaner for quite a long time, but now she is working in this bar called The Enterprise – so that’s really good because she has got a bit more stability and everything, but I think over the next few months, probably Martin and myself will make more recordings of her in my kitchen, which has got a really nice – it’s a small kitchen, but it’s just got a nice  little reverb in there, crystal clear recordings as well so we’ll probably build up an album and maybe sometime next year ...

...and so it ends. I enjoyed my chat with Helen very much indeed, and I hope that we shall chat again soon...
...and check out her Gonzo artist page
Posted by Jon Downes at 13:26