BRAIN DAMAGE ON 'THE DUTCH WOODSTOCK'

The concert, held in a neighbourhood of the Dutch city of Rotterdam, had in the region of 120,000 in the audience, and a video giving a taste of it - Stamping Ground - has been around for many years. Other than the likes of Al Stewart, Marc Bolan, The Byrds, Santana and Jefferson Airplane, the film included Pink Floyd performing Set The Controls, and A Saucerful of Secrets live, albeit in quite an edited fashion.

But quite a lot of music was recorded that wasn't in the film, and this new set is said to include a lot more of the live material than has been heard before. As well as getting the movie itself in a remastered version, Gonzo, who have released this set, have also included two CDs of music recorded at the show. We know that some of you will have previous iterations of the Stamping Ground footage (in varying degrees of watchability) within their collections, so we've taken a very close look - and listen - for you all. Read on for our thoughts...

The two audio CDs run through a wide selection of the music heard during the festival, from the bluesy Cuby & The Blizzards (no, me neither!), through bigger names such as Canned Heat, Al Stewart and Dr John. Selections from The Byrds, Santana, Jefferson Airplane and a young T-Rex add to the fun, but curiously sound quality does vary from act to act - for example, the Airplane set does seem to suffer with the odd analogue glitch. We wonder if this is down to the availability of the source material all these years later. However, this doesn't affect the enjoyment of the music overall.

The second CD ends with Esther's Nose Job from Soft Machine, old friends of the Floyd, before we arrive at the Floyd's own two track contribution to the release. Now, I'm not an aficionado of the Soft Machine but it really reminds me of early-to-mid period Frank Zappa (which is no bad thing!). 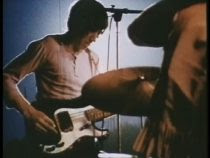 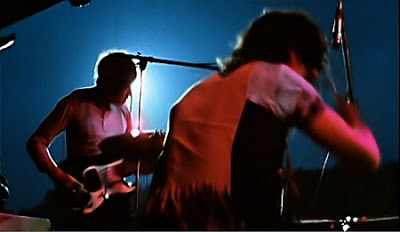 Set The Controls For The Heart Of The Sun is presented as an entirely instrumental, three minute, forty-two second version. We know from audience recordings that the track lasted around eleven and a half minutes long at the concert, so it is a crying shame that they weren't able to bring the complete track to us on the audio CD - missing out on some eight minutes of the song - and you get a fairly swift fade at the end.

So, how does the final track, A Saucerful Of Secrets, fair? Not much better for us completists. With the track running at twenty minutes at the concert, our hopes were dashed when we heard that the song consists of the final movement, at around six minutes.

Having said that, we're still grateful that these performances exist, even in their abbreviated formats. Saucerful's conclusion is pretty feisty, so would be great to hear in its entirety. As noted earlier, sound quality on the CDs isn't spectacular, but there is little they can do if the source material wasn't up to modern standards. Arguably, the sound on the CDs is generally better than in the film.

Turning to the DVD, it holds the Stamping Ground movie, which many of you will have seen in varying quality over the years. This release of the film runs almost ten minutes longer than past versions, and from the nicely illustrated booklet boasts not just a 2013 audio remaster, but a movie remaster too. Having said that, if you own the version released by DVDBrazil ten years ago, you will probably not notice much difference, although the colours are richer. Nevertheless, it does beat most if not all of the really ropey versions of Stamping Ground that have been around for years on the unofficial circuit.

Significantly though, the footage is now presented in 1:85 ("letterbox") format as opposed to the squarer, 4:3 ("fullscreen") format previously, the implication being that the original negatives were used, so it is nice to see more of what was originally shot. The screengrabs here - of as close as we could get to the same shot - show just how much more can now be seen.

In terms of the movie's content, our comments from the previous DVD release hold true still, although do take into account the extra few minutes that this version provides...

So, as a package, you don't get to hear any more Floyd, but arguably you can see a fair bit more, albeit peripherally. As far as the festival film goes, this would be the one package that we'd now recommend if you've not yet got it in your collection. It's always a joy to see the band performing in the early 1970s, and despite it being a mere taster of their appearances in those days, there's precious few bits of footage out there. Coupled with the thoughtful packaging and well-illustrated booklet, housed in an old-style fat double CD type case, The Dutch Woodstock might just be worth adding to your collection.