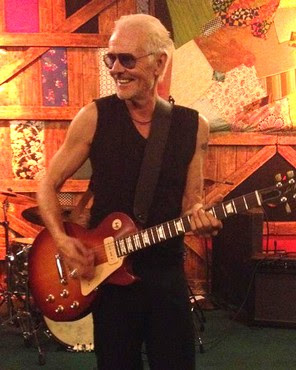 I like being a journalist. OK my craft has come in for somewhat of a battering in recent years, and I usually don't tend to admit that I once wrote various odds and sods for The News of the World. But I still - on the whole - enjoy what I do, and one of the things that I enjoy most is the fact that I end up talking to such nice people. Last night I email Michael des Barres. As regular readers of this blog will know, yesterday I posted a sneak preview of his upcoming new album; a slinky, funky (and ever-so-slightly-sexy) bluesy number called 'Painkiller'. In the lunchtime post my new MP3 recorder arrived, and I spent much of the day trying to work out how to use it. I emailed Michael asking whether I could talk to him at some point, and - much to my pleasure, (and I have to admit, slightly to my constevrnation) - he emailed me back with his telephone number.

I shooshed Prudence out of my study. She was asleep on the floor and snoring loudly, and I was afraid that if she had stayed, then Michael would have thought that I was suffering from a particularly embarrasing digestive tract disorder. I grabbed a bottle of diabetic pop, plugged in my new MP3 recorder and telephoned him. It had been years since I last did a pop star interview, and I have to admit that I was a little nervous....

MICHAEL: Hi Jonathan
JON: Is that better?
MICHAEL: Yes, much. Now you sound like Anthony Newley where before you sounded like Eno
JON: I'm telephoning from a tiny village in North Devon that no-one has ever heard of. We are in the middle of nowhere, and the telephone lines are not great
MICHAEL: That's absolutely spectacular, I haven't been in Devon in 40 years. I think with Silverhead my first band, during the 70s when it was the de rigeur thing to do to get a cottage in the country and make an album, I think we went down there, but we ran out of coke so fast, we all ran back to London
JON: I think in the little village that I am in no-one has ever heard of coke; they think its that black stuff that comes in bottles
MICHAEL: (laughs) but you can have it with Jack Daniels...

...anyway I am delighted that you have picked up on the song. The whole album is really rough; its a real lineage album. Its not a homage, but its kind of part of my roots; that whole growing up in the mid-60s, going to The Marquee and seeing Zoot Money and Georgie Fame. The whole trajectory of the British Edwardian dandy blues guys. I wanted to make that album, and that's what we've done.

JON: It is interesting that you say that, because I thought when I first heard it that I could hear Zoot Money's fingerprints all over it..

And it was perfectly true. There is something magickal about the hammond organ driven bluesy rock/pop from the mid-1960s. I was only a boy at the time, and discovered it all many years after the event, but I discovered Zoot Money playing on a Kevin Coyne album in the late 1970s and fell in love with the sound. My old friend Tony 'Doc' Shiels, the Irish bluesman, gunslinger, surrealist and wizard also spoke (and speaks) very highly of George Bruno 'Zoot' Money, and the whole English funky blues sound that Money pioneered can be heard in wallages on 'Painkiller'. It was his love of this sound that inspired the band to search for authenticity with the correct keyboards, and a masterful musician - Jebin Bruni, who plays with Fiona Apple - to play them.

Michael spoke of his teenage years in swinging London. Mitch Mitchell, drummer with the Jimi Hendrix Experience had been a classmate, and together they had seen many of the musical legends of the time. "Did I remember Terry Reid?" he asked. "Well Duh!" I wanted to say, but decided not to. You don't say "well duh!" to someone you have only just met, and whose vocal ability you have admired for yonks. Yes, I told him. I did remember Terry Reid - the amazingly unrecognised singer who apparently turned down the post in the nascent Led Zeppelin that eventually went to Robert Plant in favour of a solo career that went nowhere fast. He is one of the most under-rated singers of his time...

My conversation with Michael was like that. He was obviously supposed to be plugging the forthcoming album, which is called 'Carnaby Street' (fittingly enough for a record which revisits the scenes of Michael's mis-spent youth, but we soon realised that we were two men who still took music seriously, and I just enjoyed listening to him reminiscing about "magickal times", the memory of which are "what this album is all about". He waxed lyrical about the glorious mixture of blues and soul which produced such a rich vein of music over the years; a vein which he is unashamedly mining on the forthcoming album.

He is in the process of taking a reunited Silverhead for some reunion gigs in Japan. In December Michael told Japanese fans:

"I have always felt that Silverhead came alive in Japan. We were a very young band when we arrived. On landing at Tokyo airport we were greeted by car loads of fans who followed us into the city. They gave us such love. We realised that Rock and Roll could bring people together and help celebrate each other. We left Japan a better band. Now we return and will play our hearts out for you...These songs mean as much to us today as they do to you....May you come forever....!!"

But when he returns to America after the gigs, he will be starting real work on promoting the new record which will be out in the summer or autumn.

One of the things that I found particularly refreshing about him was the fact that he still feels passionate about what he does, as - apparently - do his fans. A lot of the people, about 80% he estimates of those who come to see the band, he told me, are young men and women who think that "we are an indie band". You could almost see him grinning as he said that. I told him the true anecdote about how I had played 'Painkiller' to a young lady of 14 who had been working in my office all afternoon, and how she was already talking about getting me to blag her a copy of the album and some tickets to go and see the band if they come to England. This actually appears to be a very real possibility if things go well, and it won't just be young Jessica trying to blag her way onto the guest list. I think her ageing Uncle Jon will be trying to do that as well.

The main emotion behind the album, he says, is "Joy. Its not angry, its not ironic, its just energetic"... "It's just the blues" I interject. "Exactly" he said. The opening track sets out his stall for the album. It starts with the line "I was 19 in 1967. I'm just laying my cards on the table. I'm not being retro, I am not looking backwards, I'm just saying that this is what happened".

"We are very proud of it, and its a great band" he enthused. The cover, by the way, according to Michael "has me bursting out of a Union jack".

He seemed so pleased that I had been so impressed with 'Painkiller'. "Its at a very early stage" he said, and went on to say that I was one of the first people who had heard it. He said that he was particularly impressed with Gonzo Multimedia, because when he met Rob Ayling it was so perfectly obvious that he, like Michael, and like me, was someone who still took music seriously and truly believed that it was important and life affirming. We talked about dogs, and we talked about cake, and scones, and I promised that if he wanted to, next time he is in England he can come down to my tumbledown rural retreat and play with my dog and eat my wife's home-made cake. He sounded rather enthusiastic at that and promised that he would pack his wellies alongside his high heeled boots. And I think that he might actually have meant it.

He was one of the nicest and most charming blokes that I have spoken to in a long time. His level of enthusiasm about 'Carnaby Street' has enthused me to such an extent that I am really looking forward to hearing more of it. Unless I have completely misjudged the situation, Michael des Barres is a perfectly charming, and completely sincere geezer who - blessed with a fine set of vocal chords, and the idee fixe that rock music is a good, noble and spiritually uplifting discipline, who has quite possibly just made one of the great albums of a long and distinguished career.