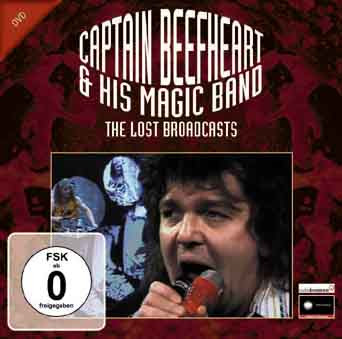 Well, I have Don Glen Vliet , his real name, to know by the title "Gimme Dat Harp Boy" by that time quite exciting sampler "Gutbucket". There we presented the band a rather oblique Blue title, which comes from the album "Strictly Personal". Furthermore, I noticed that soon double LP "Trout Mask Replica", this flashy-colored plate with the fish head down on it, in the hands. Thundering polyrhythms and strange sounds with trips to the free jazz kidnapped me into another world. Frank Zappa had once founded his own label, Straight, and Captain Beefheart now enjoyed the artistic freedom. After this record was the Captain somewhat tamer (and in a certain way 'commercial') to lose to make music, but not without his own special way. In this time after the fall shots this DVD (the composition of the board "Clear Spot").
They are the entire session in the studio of Radio Bremen, 12 April 1972 represent. So far, only one song was officially released, the station sends the title number nine. With a raging bass solo starts the video, even though the money only after twenty-five are seconds an image to clay. The guy plays the bass like a guitar, which might not be surprising, because it is the guitarist of the band, this is the best: Rockette Morton . "Mascara Snake", it meant also a former member of the band, the solo is obviously dedicated. "Click Clack", "Click Clack" - yes, there are two times this song here. The captain is voiced again and the band plays it rough as hell, almost translucent in ecstasy, with a 'Slide Duration' of guitars and a Harpsolo of Beefheart . This is so wonderfully bizarre, and carries me in a time machine already gone again and I note that they have seen this time and post-Beat Club.
Yes, these oddities are found today rare and so it is wonderful to now this once again as a preserve can understand - such short then thrown, somehow useless and meaningless published songs like "Golden Birdies" to experience and also to smile about. And then this wonderfully wacky idea of the band, where the cameraman remains rigid on the drummer, who takes his name in cool call the monocle out of the orbit. Oh, Winged Eel Fingerling get but still be seen shortly.
And then the title, which is equal to three times represented. The Whimsical here that is stopped after about four minutes Track One and the Captain a discussion with a technician or the manager or whoever leads. He seems to leave the stage, the band plays on, but then he's back - gorgeous by the way his bright red pants. The song will play in the second round and will be even more intense, even hypnotic. And then there is really gorgeous and messy - my heart laughs when Beefheart reaches for soprano saxophone and fabricated a wild ecstasy. That has a lot back then shocked the music.
Still fascinates me this full sound with the three (!) Guitars, plus the guys in bizarre clothes, complete the overall picture. Sometimes I wonder, is this serious or should the audience be kidding a little bit?The whole thing is filmed against a blue background, except for the most formal yet accessible part 3 of "I'm Gonna Booglarize You Baby", which run in the background for some 'psychedelic' shenanigans ... to the musicians are constantly active and run sometimes criss across the stage.Thank you to whoever, but to enjoy these 'treasures' to be allowed to complete now!
pity the captain unfortunately left this world on 17 December 2010 - he died as a result of his years of multiple sclerosis.
Line-up:
Don Van Vliet aka Captain Beefheart (vocals, harp)
Rockette Morton aka Mark Boston (guitar and bass),
Zoot Horn Rollo aka Bill Harkleroad (guitar)
Orejon aka Roy Estrada (bass)
aka Ed Marimba Art Tripp (drums)
Winged Eel Fingerling aka Elliot Ingber (guitar)
Posted by Jon Downes at 02:27