Herewith another European review of the bloody fantastic new album by Michael Des Barres. At the recent CFZ Weird Weekend, Dave and I played Carnaby Street solidly and I plugged it unmercifully at every possible opportunity. I have become like some weird surrealchemical preacher, spreading the word of Des Barres to the masses (and I am enjoying every minute of it). By the way, a little birdie tells me that the Mighty Marquis will be back on the Andy Dick show very soon. I hope that this means more exclusive video stuff for the Gonzo Daily.
PS. The other day in conversation I referred to Michael as 'The Mighty Marquis' and one of my young neices thought I was talking about a giant tent.
http://rocktimes.de/gesamt/d/michael_des_barres/carnaby_street.html
Michael Des Barres / Carnaby S
Running time: 35:44treet
Format: CD
Label: Gonzo Multimedia, 2012
Genre: Rock
Review on 20.08.2012 Markus Kerren
When you think of the rock and roll world of the seventies and the name Des Barres thinks is a possible first the first name Pamela 's mind. However, you do so her husband Michael 's a bit wrong, even confess though the reviewer must, so far (at least consciously) any songs from Des Barres to have known. Since the late sixties a native of England is also already in the business after all. Musically, it was in recent years, in which he focused primarily on his acting career, become fairly quiet, but with his new album "Carnaby Street" logs of living for decades in sunny Los Angeles musician back with a bang. And with what kind of! 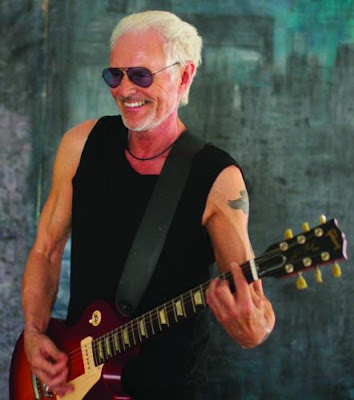 Michael Des Barres was prior to this disc deliberately returned to his roots. Go back to the blues and especially back to rock in its purest form. So what you can expect in no case of this plate, innovation of any kind and yet is what is offered on the these ten tracks to such an extent that "Carnaby Street" provided me with a very bold graphics TIP is.
Offered seventies rock is with a lot of ass in the pants. These very strong as varied song material provided by a singer who has certainly been through a lot and seen what you his address - the vocals come as powerful as loose-easy, accurate with each emphasis and placed between the lines of screaming on the point - to twitch and his rough voice and without batting decreases. Besides, he also has a very high quality companion at his side, which refines each of these compositions with just the right feel.
The album starts with a bluesy swampigen Groover ("You're My Pain Killer"), while the rapidly be ever a distinct fragrance brand. Superb comes here including the organ and electric piano playing of Jebin Bruni , the number - equip with a dense atmosphere unlikely - in addition to singing. The rock hammer is unpacked in the subsequent title song, which then really going to post. After the previously more bluesy soulful singing shows Des Barres here that it can also be a real Frontsau and his voice convinced its full length. Towards the end, the front man screams even in ecstasy, which is very engaging. Who is not excited mitwippt may, in good conscience can press the 'seemingly dead-stamp' on the forehead.
But Michael Des Barres makes quite simply in line with a good figure. The tearjerker of the disc, which again very bluesy, soulful marketed as "Please Stay" is as gripping as it also really poignant. Ultimately, one of these 'Please-forsake-me-not-ballads', but which is taken so so hot that it has led me to never-ending goose skins and still leads. Once more outstanding is the organ of Jebin Bruni . An awesome song replaces the next, and because I do not want to digress too far, I would like to mention just "Route 69", which would probably bring every single rock hut of the globe to a boil.
"Carnaby Street" for me next to Patti Smith's new work Banga been the rock album of 2012! Rock music of the old school, which is brought from a boiling hot band and a front man who seems to have no blood flow, but pure rock and roll in his veins. If you like handmade rock music in the style of the seventies, which can strike without hesitation here and will have a lot of fun with this disc. Who wants first listen anyway, which were as Anspieltipps "Carnaby Street", "Please Stay", "Route 69" and "You're My Pain Killer" highly enough to heart!
Really big tip for those who like their rock with no down-tuned guitars and with a powerful singer!
Line-up:
Michael Des Barres (lead & background vocals, guitars, percussion),
Paul Ill (bass, background vocals),
Eric Schermerhorn (guitars, slide guitars)
Jebin Bruni (keyboards),
David Goodstein (drums & percussion, background vocals)
Tracklist
01: You're My Painkiller
02: Carnaby Street
03: Forgive Me
04: Sugar
05: Route 69
06: Please Stay
07: Little Latin Lover
08: Hot And Sticky
09: From Cloud 9 To Heartache
10: My Baby Saved My Ass
If you have not done so already, check out Michael's Gonzo Artist Page
Posted by Jon Downes at 11:46