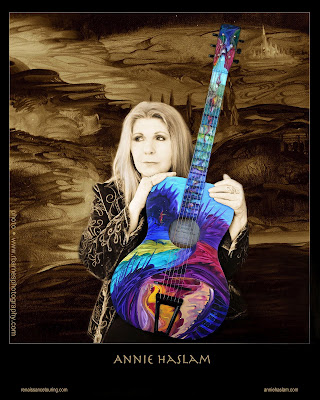 I have been looking forward to speaking to Annie Haslam for a long time, not just because I have been a fan of her music for many years, but because she has always come over as such a nice person. Well, over the years I have been caught out by that on a number of occasions, when people who have seemed nice have turned out to be anything but, however Annie turned out to be even nicer than I had expected.

We chatted for ages, and - thanks to my lovely wife Corinna who acts as an amanuensis on these occasions - here is the first of a multi-part interview with Annie...

Annie: It’s fantastic. I am so thrilled about it. It’s unique, every song is unique in itself. Very unusual songs. The masterpiece on it – I call it the masterpiece – is called 'Symphony of Light' and it is about Leonardo da Vinci.

Jon: Well that sounds like a very good start.

Annie: It’s gorgeous. Well I am a painter now – I don’t know if you know I am a painter, and I’ve always felt an affinity with him, plus who else could write something about the Renaissance Man other than Renaissance?

Jon: You’ve just taken my next line – he was the main figure of the Renaissance and you are Renaissance.

Jon: I didn’t know that.

Annie: He was a singer and he played the lyre. I am sure you know he was an inventor, you know all the things that – I try to cover in the lyrics the different parts of his life of when he was painting and that was put on hold a little bit when he was doing the weapons of war – you know designing those, which not many of them were used – if any. But some designs were used I think for certain bridges and things but it’s perfect. Michael Johnson came along with the music and funnily enough he didn’t want me to write about Leonardo da Vinci and said ‘No it’s too literal’, and I thought ‘I’m going to do this if it kills me.’ So the giant book on Leonardo’s paintings that I had in the studio while we were recording and then he came along with this music that was really very intricate and intense. There were too many parts to it, and I felt a little bit like he did about the writing about Leonardo – I felt the same about his music, and in the end it turned out to be everybody’s favourite.

Annie: It is, it starts off with a prelude which is just a simple orchestra – it’s not a real orchestra, I wish we could afford that but we are not in that position- yet. It’s just me singing with an orchestra and it’s slow and it’s talking about him. Leonardo, in the last two years of his life, was given an apartment by the King of France, and he looked after Leonardo like he was his father. That’s where Leonardo lived until he died, and the beginning is when he was an older man and he would go an open these big velvet curtains and the sunlight would pour through and because I believe that he was obviously connected with the universe – genius like that, I mean there’s many special people on this planet, I think we are all special and I think we all have many talents, but we don’t know – a lot of people don’t know it, don’t believe it and don’t know how to access it, but I believe that we all have it. And so it talks about him connecting to the light of the universe that comes in.

Jon: So when does it come out?

Annie: I would say maybe February/March. We wanted to get it out before Christmas, but we’re just in the mixing stages – we’ve finished the mixing but we are just doing touch ups and things, and we can’t rush it. This is too special and too important because it is our first studio album in twelve years.

Jon: And of course it is your first post-Betty isn’t it?

Annie: Yes and I think she was floating around when I was doing the words. I think she was floating around – in a good way of course. To put it out when the election’s coming soon, and there’s so much unrest around that and that is going to take a lot of attention away from a lot of things. It’s going to be a big distraction, plus the Christmas rush and things. And also we are touring. We start rehearsing and touring in the next couple of weeks so to physically get all this done is just not possible. I am designing the artwork as well and I wear many hats in the band, which is fine so there is a lot of my energy going into this and so it is just not the right time.

Jon: No I can see that, especially with the election. That’s going to take over everything.

Annie: Well it is already isn’t it?

Jon: Not so much over here in , but yes.

Jon: How long have you been living in ?

Jon: Because even after 21 years I still know I am talking to a lass. You don’t sound Americanised at all.

Annie: Well I know I tend to say ‘I gotta do this’, so I drop my ‘Ts’ here and there and I come out with some sayings sometimes and say ‘Oooh did I just say that?’ Not that I dislike it, I would prefer to keep my accent. I did go to elocution lessons when I was – I think about – 8 or 9 and I thought why are my mum and dad doing this to me? They, in fact, must have realized they needed to do that for my future because when anybody usually does a review of my voice, they say my diction is very good – they guided me very well.

[I then made a silly joke about Gracie Fields, and Annie came out with the most remarkable Gracie Fields impersonation that I have ever heard]

Annie: She was fabulous. I loved her movies and George Formby

Jon: You can take the girl out of Lancashire, but you can’t take out of the girl

Annie: No you can’t

Jon: I was watching your DVD. The one where you did Scheherazade and Turn of the Cards live. Howard sent me a copy of that and isn’t it magnificent?

Annie: You know what…it is magnificent in a different way. I am sad that we couldn’t have done better filming on it because there were things in it that I nearly had a heart attack because I was with the guy when he edited it. This wasn’t his fault, it was just that we didn’t have enough cameras so we didn’t do it correctly, you know. I think the beginning of Ocean Gypsy, when Mick is playing his guitar it sounds as if – that or I Think of You – and the camera’s on him and you can see our manager in the background in a room with a light on, sitting at his computer! Bet you didn’t notice that – it’s things like that that make it look very real and in your face, you know.

Jon: Well that is what I was going to say. The fact that it doesn’t come over glossy. It’s got the vibe of a bootleg, which is good. It is warm and has integrity.

Annie: I see what you mean, yes. It’s very real, it’s got a lot of love in it. I am not saying the old band wasn’t great - which it was - but this is just different and it’s new. We just get on so well that you can see it, you can feel it in the music and you can see it when we are on stage together.

Jon: I think so, and I think that there is something very warm and heartwarming about the performance on that DVD

This seems a fairly logical place to leave Annie for today. We will be back tomorrow with more..