MICHAEL DES BARRES DESCRIBES THIS REVIEW AS "THE SMARTEST YET" 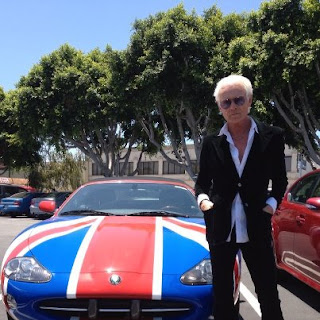 Chances are you may not have heard of Michael Des Barres,but you are probably familiar with him, nonetheless. British born Des Barres started out as an actor. That’s him in sunglasses, bobbing his head as Lulu sings “To Sir With Love” in that iconic 1967 movie.

In the early 70s Des Barres formed Silverhead, the seminal, albeit under-appreciated, glam band. When that broke up he started Detective, one of the first bands signed to Swansong, Led Zeppelin’s boutique label.
By the early 80s, he was lead singer for Chequered Past with ex-Sex Pistol Steve Jones and former Blondie members Nigel Harrison and Clem Burke. Des Barres also co-wrote the ubiquitous song, “Obsession” for the band Animotion.

In 1985 when Robert Palmer refused to tour with his band Power Station, (which included Duran Duran’s John Taylor & Andy Taylor and Chic drummer Tony Thompson) they recruited Des Barres for a world
tour that culminated in a performance at Live Aid. Throughout the years Des Barres continued working as a
respected character actor appearing in a myriad of movies and television shows, including the notorious “Smelly Car” episode on “Seinfeld.”

If that doesn’t seem impressive enough, don’t forget that Des Barres was married to the infamous Miss Pamela, doyenne of the Los Angeles rock scene and author of “I’m With The Band.” Although the couple divorced in 1991, there is an affection and respect between them that remains evident when they are interviewed in the Rodney Bingenheimer documentary, “The Mayor Of The Sunset Strip.” In between the acting gigs and the Super Groups, Des Barres also managed to record two solo efforts in 1980 and 1986. He has finally released his third, Carnaby Street.

This is the album Rod Stewart might have made had he stayed with the Faces, rather than detouring into Disco and then trapping himself in the AARP landscape of Pop Standards. Des Barres vocals sandwich
comfortably between Stewart’s whiskey-soaked rasp and Joe Cocker’s authoritative growl. The record opens with the grinding blues of “You’re My Pain Killer.” The instrumentation is a down & dirty combination
of roiling Hammond organ and prickly guitar licks. The lyrics are a testament to the healing powers of love.
Des Barres is content to play the sophisticated satyr on three songs: “Hot And Sticky” is as salacious as it sounds. “Sugar” is powered by a relax-fit Bo Diddley beat and wah-wah guitar fills that wash over the melody. “Forgive Me” weds whipcrack percussion and blistering guitars. Des Barres’ mien is the typical male mea culpa: sure, I was inside a lot of other women, but I was thinking of you the WHOLE time!

The best tracks here are the title track and “Little Latin Lover.” On Carnaby Street Des Barres vividly recalls the halcyon days that gave birth to British Rock & Roll…. “I was Oscar Wilde in velvet jeans, and everything you’ve heard is everything I’ve Seen.” Guitar riffs uncoil like a menacing python, the tune locks into a swaggering groove, tambourines shimmer and cascade as backing vocals “whoo-hoo” on cue. Des Barres name checks pals like the Stones The Kinks and The Who.

“Little Latin Lover” makes the political personal. Punky guitars and an insistent tom-tom beat anchor the rollicking melody. The lyrics couch the plight of Immigration and Naturalization in a love story: “She’s got the right to fall in love, the right to be free/ She’s not an immigrant, she’s a refugee.” As someone who emigrated to this country almost 40 years ago, Des Barres clearly empathizes…. “A family waits, contemplates its fate/How to stay united in the United States.”

Stax Volt and New Wave collide on “From Cloud 9 To Heartache.” Other highlights include the Otis Redding homage of “Please Stay,” and the ramshackle travelogue of “Route 69.” On the latter, hapless
lovers Larry and Suzie plot a course “from Kansas City to Sunset & Vine.” The album closes with the rip-roaring “My Baby Saved My Ass.” Recalling his decadent Glitter years, the song is a mixture of debauched braggadocio and tender hosannas for the woman who saved his soul.

This album is very much a group effort. Des Barres has surrounded himself with a cadre of adroit players: Bassist Paul ILL, Eric Schermerhorn on guitars, Keyboardist Jebin Bruni and drummer David Goodstein.
On Carnaby Street Michael Des Barres embraces his hedonist history without wallowing in nostalgia. And he does it with aplomb.

Original Post
If you have not done so already, check out Michael'sGonzo Artist Page
Posted by Jon Downes at 12:44