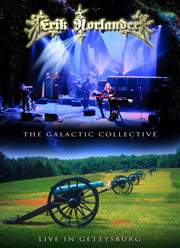 This is particularly cool. It is a Dutch review of Erik Norlander's recent records, translated into English for us by the man himself...

The term bombast usually has an ugly connotation. These people have never heard keyboardist Erik Norlander play. With "The Galactic Collective," the American's pyrotechnics are upon us. But they are always tasteful and pay close attention to the melodic line. And speaking of bombast: the music comes on two CD / DVD sets in both studio and live versions.

Let's start with the studio version on two CDs. Songs like Neurosaur, Fanfare For Absent Friends and Garden Of The Moon remind us of the euphoric motifs from the golden book of Keith Emerson - a feast of recognition. This is a great audio example of Norlander's inspiration. You will also hear references to Pink Floyd.

But Norlander - known for Rocket Scientists and Lana Lane - has developed his own particular style. His best moments are ultimately the use of his Moog synthesizers. Norlander plays six (four Minimoogs, a Modular Moog Minimoog Voyager and 1967), becoming the undisputed executor of the will of the late Dr. Bob Moog.

At the head of such an impressive cockpit, he sucks the listener into the deep space. "To boldly go where no keyboard player has gone before." But the Hammond organ, he also rocks solidly, as in Astrology Prelude.

Norlander combines flawless technique with the expressiveness of a composer who knows exactly where he's going. And he succeeds in this band format so that this record does not lapse into new age but really rocks. Thus the toms sound of drummer Nick LePar dark and deep as space itself. And the various guitar solos are like trips outside the space capsule. And all this is backed up by the pumping bass of Mark Matthews. Should NASA ever need an intergalactic rock sound to make contact with extraterrestrial life, then Norlander is their obvious choice.

This collection represents his instrumental songs back catalog, but adds new, rich arrangements far. Norlander himself considers them as the final edition. You hear his earlier work gloriously reverberate, whether they are songs from his solo albums (Arrival, Neurosaur, Trantor Station), the band of his wife, Lana Lane (Astrology Prelude, Garden Of The Moon) or his own band Rocket Scientists.

The Dark Water is an epic tour de force, which mixes themes from the thread running through the Rocket Scientists releases. Space: 1999 is obviously not just picked from the "Oblivion Days" album, but it is primarily a tribute to rock guitars propped on the famous soundtrack of the legendary TV series with Martin Landau. After The Revolution (from the last RS-album 'Revolution Road') is Norlander's most complete composition with lovely synth arpeggios and choirs.

To see this galactic music visualized, Norlander also adds a DVD of recording sessions in the studio. We see a band that - despite the static environment - delivers dynamic performances which are explained by Norlander when speaks to an unseen interviewer. What he says creates an added value: the viewer will understand the genesis and evolution of each track. The composer guides you through his diverse discography convincingly. Moreover, for the synth freak, a guided tour of the many keyboards is added as a bonus feature.

To see this virtuoso musician on stage, grab the second DVD / CD set "Live in Gettysburg." The tracklist and lineup are broadly in line with the studio album, but now with Lana Lane in a prominent guest vocalist role. The concert recording dates from RoSFest 2011 in Pennsylvania, and is introduced by Michelle Moog-Koussa of The Bob Moog Foundation. She confirms that Norlander is a phenomenal musician that all prog fans should celebrate. So in this sense, he does not even have to wait for Rick Wakeman to retire.