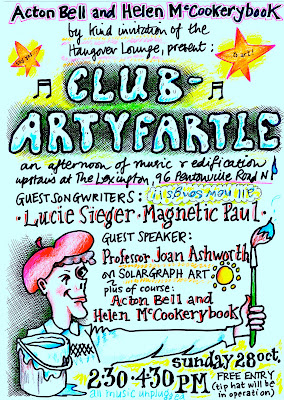 I am particularly impressed with the concept of Helen McCookerybook's Club Artyfartle, so as soon as I had the opportunity, I gave her a ring to see how the most recent one had gone...

Just in case you missed them, you can read Part One and  Part Two

HELEN: It’s taking that – you know that awful cultural industry thing that they’ve suddenly started saying about ‘oh Britain blah, blah cultural industries’ and you just sort of think well why not just take the industries out of that and just make it…. <laughs>

JON: Yes and just keep the culture...Oh and by the way I thought Voxpop  Puella was gorgeous.

HELEN: Oh thank you.  It’s not the music I make these days, but it was something of its time and it went with some lovely films.  At some point I’d like to ….because the films were also based on the seven ages of women and I just asked seven film-makers to choose an age and everyone straight away said what they wanted to do, and actually Joan Ashworth who did the sonograph photographs, (see Part One) she made the first one, which was actually – she did an animation of a cell dividing, which is beautiful.  It was scratched on film and animated. And it was a cell dividing and it divided into bud and it turned into a foetus and turned into a baby and then it was born and it all happened in about a minute and a half. And the last one was a friend of mine whose granny was a 102 reminiscing about working in factories in , sitting there in her sort of knitted cardi, you know, and in between them were all sorts of things.  There was an Icelandic clubber getting ready to go out, and somebody made a film about her granny who was widowed when she was 70 and the whole film was mostly her granny’s neck as she was talking.  They were very short films, only 2 or 3 minutes long, just like the songs, you know, and it went song, film, song, film, but I just fancied releasing the songs just on their own as an exercise, and again they are a limited edition – there’s only 100 – and then it’s done kind of thing.

JON: Will there be another edition of them at any point?

HELEN: Don’t think so, no.  No I think I’ll stick to this.  I’ve got another song cycle I did before which is called Herms which is the seven deadly sins of the 20th Century. I might possibly master those and do another limited edition thing of those. I like the idea of not making very many.  It’s not even a pose of being elitist or anything, it’s just sort of as close as you can get to the Artyfartle type of thing, really just going into someone’s house and singing, and then going away again, you know.

JON: Has it been selling?  Are people interested? Apart from me.

HELEN: I’ve sold about 20 out of 100 which isn’t bad because I haven’t done any publicity or anything.  I have just stuck them on the blog, you know. I sold quiet a lot on Friday at the Borderline gig, even though it was a Helen and the Horns gig, people asked me about it and I had taken some down there, so I’m expecting to sell as I do gigs, you know. What I am charging – I mean with what I have spent on mastering, and pressing them up and I paid my daughter for her artwork, and it just about makes its money back. Then when I have got that, maybe I will do the next one. It’s not a big money spinner but just a spinner. <laughs> It spins my life along, you know.

JON: I’d like to see the films, I wish there was someway you could release the songs and films together.

HELEN: Well there is something I might possibly do, but the films are on lots of different formats and it was really interesting getting them together, because some of them came in as videos, one of them came in as a high-eight and I had to pick that one up from somebody’s doorstep, I think in Hornsea, and it was a bit like being a spy.  I had to go at some time after 10 o’clock, I had to go into the porch of the house in Hornsea and it was in a little cosmetics bag from Selfridges, and it was sort of tucked behind the milk bottles <laughs>.  And sort of put all the films together.

It was performed in the Museum of Emotions down in the Oxo building on the South Bank and went on tour and stuff so it had a bit of a life as a live show, got a horrible review at the Edinburgh Fringe, but that didn’t bother me because at the Museum of Emotions the security guards really liked it. So the person who was the real-life reviewer at The Scotsman didn’t like it, but the security guards in did.  That was good enough for me.

HELEN: When we toured it was really strange because some of the elder women we thought would love it, really didn’t and the people who liked it the most was  6th formers in .  We took it down to and they absolutely loved it. It wasn’t the people that we thought.

JON: You know, that tells us all more about the nature of art than you would expect

HELEN: Well, it’s one of the things that I really like that it doesn’t matter how many focus groups that you have, and how crafty you are about audience – you know – doing stuff for an audience and how much you plan.  Sometimes, it’s just like – you know how popular Vashti Bunyan became? And it’s like the least, the most surprising person, the least person you would expect. And I really, really like that about everything to do with art that people will pick on somebody who … they just choose to value that person full stop. And like it for their own reasons and stuff, you know. And I like that about art and music that people can connect with it, whether it was intended for them or not.

JON: I think that is probably the most profound thing I’ve heard all day <laughs>

And that is it for this time. I always enjoy talking to Helen, and my conversations with her always provoke a lot of philosophical thought. No doubt, we shall be talking on these pages again soon...

If you didn't get to London to Club Artyfartle why not check out her Gonzo artist page
Posted by Jon Downes at 10:59