Alan White has plenty to be smiling about these days. The ace musician who’s sat behind the drumkit for monumental prog rock band Yes for over forty years still has a lot to look forward to. Although some of the band’s core musicians have split off into their own direction to create variations of the longtime British orchestral rock ensemble, White — who’s been a constant fixture throughout many of the band’s most recognizable and most successful albums — is happy to be seated on his drum stool as the band continues to sail on. And sailing is exactly what they’ll be doing in the near future through our local waters. 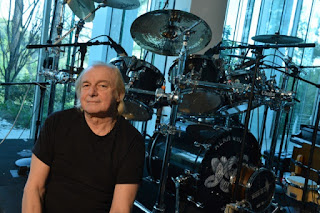 DO THIS: YES AT MAHAFFEY THEATER 02.11.17
Preparation for the band’s annual “Cruise To The Edge” rock boat excursion is gearing up and, as a bonus, the band will make a stop at St. Petersburg’s Mahaffey Theater to treat fans to a dose of their intricate, elaborate blend of music after returning to port. Speaking to me recently on a break in between tour dates from his west coast home, the veteran drum master sounded relaxed and jovial as he filled me in on the band’s upcoming stint of shows, the cruise, his brush with John Lennon and his being inducted into the Rock and Roll Hall of Fame.
This interview is part of our 2017 Spring Arts preview. See more springtime concert previews here.
CL: Are you currently out on the road? Or are you rehearsing or on a break right now?
AW: No, we’re currently resting up. We did a Japanese tour in November and we’re resting right now. And then in February we’re doing one of the Yes cruises from Tampa.