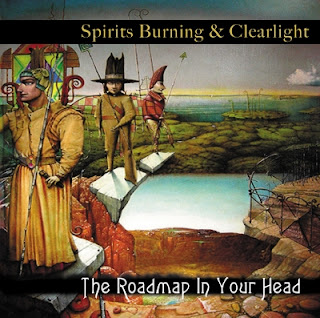 "The Roadmap in Your Head" is already the second CD after "Healthy Music in Large Doses" from 2013, which presents a collaboration between the Don Falcone-led music collective and the French keyboardist Cyrille "Clearlight" Verdeaux.
"The Roadmap in your Head" is the thirteenth studio album by Spirits Burning, a project by Don Falcone, to which numerous guest musicians have always contributed. Among them, Daevid Allen, who died in 2015, almost always composed the song "Roadmaps (The Other Way)" on this album.
The "Roadmap in your Head" has been composed by over 30 guest musicians, who were not only releasing their solos, but were also involved in the creation of the compositions, or the improvisations. This shows that Spirits Burning is more than just an Egotrip from Falcone.
Among the musicians are former and current Gong members as well as former Hawkwind members. Also Theo Travis, Steve Hillage, Harry Williamson and Judy Dyble will not be unknown to many progfans. All other musicians, who have not yet been mentioned, seem to be active in numerous other projects and bands, but I am not aware of them.
In two plays, the esoteric chant of Bridget Wishart sounds, which besides Hawkwind also participates with Astralfish, Djinn, Demented Stoats and Omenopus.
The influence of Cyrille Verdeaux (some by his Prog project Clearlight known) makes itself among other things through beading Pianoläufe and probably also by polyphonic, sometimes strongly to Clearlight reminding arrangements noticeable.
The continuous relaxed character of the music will probably not appeal to all friends of the "Prog" immediately. The mastering works were done by the electronic musician Robert Rich. This should be used as an indication that this is not rocked. Some of the ideas are almost the same as the rest of the ambient music and there are also a few moments that offer purely electronic music. Drum kit, or electronic rhythms are rarely used. The rhythms are usually accompanied by the strings, or by the percussive percussion, which gives the music a tremendous ease. However, this seems more dreamy and mysterious here, so it has nothing to do with the casual ease of elevator music. "La Rue Inconnue" has for once something of psychedelic pop music.
Overall, I consider the music of "The Roadmap in Your Head" a lively and entertaining mix of traditional prog, ambient music, electronics, jazz rock fusion, Canterbury, Space Rock (with more space than rock), folk and the Elements of the romantic classic. Sometimes it is difficult to say whether it is jam, collective improvisation, or through-composed passages


CURRENTLY AVAILABLE AT GONZO
Posted by Jon Downes at 14:32