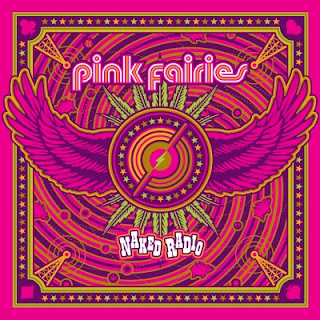 If there is a good group of veterans that I dared not hope for any resurrection, it was the Pink Fairies . These guys swept with such force and lysergic madness in the early 70s and had so well exploded in flight around 1975 that I thought all this little world disappeared in the depths of Himalayan sects, psychiatric asylums or cemeteries for animals. And yet, there is still a good star for the old-time rockers since the Pink Fairies committed the feat of re-forming in 2014. And the icing on the cake, they have just split a new album, the seventh of their discography, which began in 1971.

The Pink Fairies was a group of English rock from the underground even more underground Deviants , combo ladle and lit notorious anti-establishment revolutionary mounted by journalist singer Mick Farren (1943-2013) . The Deviants out three albums under the cloak shock between 1967 and 1969, prefiguring the punk with ten years ahead of " Ptooff! " , " Disposable " and " 3 " ). Needless to say, these records are indispensable to the ears of any historical proto-punk lover. Then, following a disastrous tour in Canada, the Deviants find themselves without money to pay their return ticket and Mick Farren is fired from the group. The remaining members down to California to play in small clubs of San Francisco during the second half of 1969. Mick Farren, he returned to England and joined forces with Twink (ex- Tomorrow , former Pretty Things ) and Steve Peregrin Took (formerly Tyrannosaurus Rex ) as the Pink Fairies and began a series of completely chaotic concerts leading to an argument between Farren and Twink and from Farren who abandons the music and turned to writing. Twink then appealed to the other lascars lost in the depths of the clubs of San Francisco to repatriate them in England and to continue the Pink Fairies. You always follow me? In the end, it is therefore in England in 1970 with Pink Fairies, which consist of Paul Rudolph (guitar and vocals), Duncan Sanderson (bass and vocals), Russell Hunter (drums) and Twink (drums and vocals).

Twink did not take long to throw in the towel and the others managed to sign on the label Polydor, which will culminate in three albums, also indispensable for hard rock historians and lovers of decadent psychedelia. "Never Neverland" (1971) contains some major titles, including "Do it" and the amazing "Uncle Harry's last freak out" , jam outraged ten minutes entirely oriented towards sound brutality and flight to lead atmospheres Psychedelic and zoroastrians. On "What a bunch of sweeties" (1972), it is "Right on, fight on" , "Marilyn" , "Walk do not run" (an astounding recovery of a rock 'n' roll boring Johnny Smith) the fun "X-ray" or babacool "I Went up, I Went down" which mark the spirits, not to mention a gross garage resumed "I saw her standing there" Beatles. And finally, "Kings of Oblivion" (1973) is intended as a small masterpiece of square rock with the song "City Kids" , which will be taken by Lemmy and Motörhead, great friends of the Pink Fairies. Common point between the two groups, guitarist Larry Wallis joined the Pink Fairies on their last album and then ventured with Lemmy on early Motörhead.

And then, nothing. The flat calm, dissolved in the mists of oblivion. The punk makes its official entry on the ruins of the Pink Fairies, genius precursors but neglected by the History. An album "Live at the Roundhouse" released in 1982 from a concert - excellent - captured in 1975. A few years later, in 1984, Mick Farren resurrects the Deviants with a line-up consisting of Larry Wallis, Duncan Sanderson , George Butler and legendary Wayne Kramer (MC 5). They recorded a live album at a club in Dingwall, entitled "Human Garbage" . In exchange, the Pink Fairies also re-formed in 1985 and align Twink, Russell Hunter, Duncan Sanderson, Larry Walllis and Andy Colquhoun for the album "Kill'em and eat'em" in 1987. Ten years later, two other Albums are released on the initiative of Twink and Paul Rudolph.

Not until nearly twenty years back to see the Pink Fairies, coming out this "Naked radio" end 2016. Of the original staff, it remains Russell Hunter (drums and vocals) and his partner Duncan "Sandy" Sanderson (bass). Andy Colquhoun (guitar and vocals) and George Butler (drums) are also present and the training is completed by keyboardist singer Jaki Windmill .

Of course, when you are a hot fan of the Pink Fairies, you will not miss out on the new album a certain weight of time which makes the performances of these musicians with the hair now white are a little less perennial and caustic than by the past. Beautiful guitar lightning crisscross the introductory piece "Golden bud" , the Fairies remember our good memories with their nervous style on "The hills are burnin '" and "Runnin' outta road" but we must admit that a few lengths appear on The continuation of the album. It gently tambourine on drums ( "Naked radio" ), it hums quietly on some songs ( "You lied to me" ) and it knows when to get excited ( "Midnite crisis" ) but it lacks a little something, A grain of madness that could have made this album very delirious. A good old rock 'n' roll of the families ( "Deal deal" ) has just finished the album on a more dynamic but it is clear that we must still use the arch-classical structures of rock 'n' roll for Find some inspiration on this record.

It should nevertheless note the effort that the Pink Fairies made by adding a bonus DVD to their album, which gives a little interest in the case. Here, it will not be the few filmed rehearsals, interviews or video clips (rather unimaginative) that will put butter in the spinach, but a concert filmed in 2014 at the 100 Club of London, with interpretations of the classic Pink Fairies. We thus find "When's the fun begin" , "The snake" , "Do it" and especially "Uncle Harry's last freak out" which makes skipping the public for a good ten minutes. This is probably what remains in Pink Fairies  : an infectious energy on stage. And so, if these lucky papy came to our country for one or several concerts, we should not miss them.