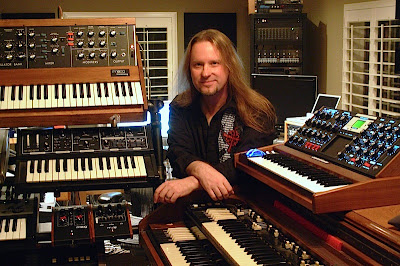 A real ‘must have’ for fans that’s sure as Erik Norlander re-issues the Galactic Collective CD with a bonus CD featuring four reworkings of existing tunes including a marvellous extended musical workout on ‘Garden Of The Moon’. Plus there is a DVD where you can see Erik and the band in the studio recording the Galactic Collective album, which is interspersed with interviews with Erik about the music and how it was composed. The latter is highly informative although to a non-muso like myself I was starting to flounder when he started to use triangle diagrams to explain the music. Interesting to see how the music is played and recorded and drummer Nick LePar has more percussion add-ons to his drum kit than even Carl Palmer!

There is also a bonus DVD feature on the synths behind the music including a massive custom built beast of a synth. Again of definite interest to fellow musicians.

The idea behind the Galactic Collective album was to take instrumental pieces Erik had recorded for his solo work, Lana Lane and the Rocket Scientists and reinterpret them for this album. Tunes like ‘Neurosaur’ and ‘Fanfare For Absent Friends’ are keyboard heaven, perfect for fans of Tangerine Dream and Rick Wakeman, whereas ‘Trantor Station’ could easily sit on an Ayreon album.

Well thought out and packaged with the fan in mind.

And check out the dedicated Gonzo artist page for Asia featuring John Payne, and for Erik solo