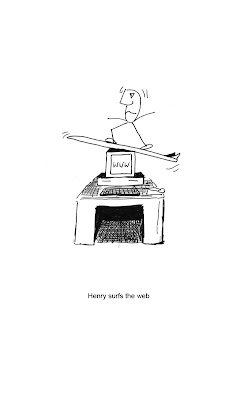 NARC INTERVIEW
with Peter McAdam re: THE NINE HENRYS

I suppose the most obvious question would be, what is a Henry?
There are nine Henrys, purported to be the world’s first cloned cartoon character.
They live in a strange lo-fi domestic surrealist world peopled by talking rock buns and elephants on wobbly stilts. They mooch around in their minimalist universe suffering from an existential crisis with some genetically modified humour thrown in .

How does a book like The Nine Henry's start out? Did you have an idea for the character first, or the idea for a book?
In my numerous writings, ie. plans for world domination and draft letters suing God, my pen would wander over to the margin of the page and I would doodle a cartoon character, then in a night vision, (I recommend Pilgrim Premier cheese for lucid dreaming, ASDA mild cheddar for astral projections) a word written down in a dream “The Nine Henry’s” I awoke wrote down the dream in my dream diary and forgot all about it.

After scanning through my ‘genius books’ (notebooks of ideas that never see the light of day), I noticed all these daft cartoons, so I cut them out, placed them alongside each other and the dream word popped into my head… “The Nine Henry’s” The rest is history, with a little bit of eczema attached.

There's quite an extensive “roll of honour” inside, how did these people contribute?
I thought I would get into this crowd sourcing lark so I signed up to a website and with luck
on my side it went bust and it took some of the money I had raised, so I made a decision to do it myself using the Nine Henry Facebook page and I raised about a quarter of what I needed to get the book published.

Those thirteen people are the first contributors, but then signed to Gonzo and kept my promise in mentioning the early funders in the roll of honour in the book.

If possible, can you give some idea of what the process for creating a Henry illustration is like?
Do you tend to plan ideas out or is it nowhere near as complicated as that...
It’s really quite simple to explain but it’ll take me 700 pages, so I’ll summarise: when you hit a brick wall in a project, go off and do something completely different, doodling Henry opens up the stream of consciousness aspect, by playing around with ideas and concepts, I’m just a kid really, playing with mental plastercine. My most subtle work is produced by drawing a Henry in some surreal situation and a few days later when I’m flicking through my book(s), there might be something said on the TV and I’m looking at the drawing and Voila! I call them ‘creative collisions’ whereby you’re thinking of something, then from leftfield another idea collides and this transforms the content.

It’s like the creative process, it’s all about questions and answers, I draw an enigmatic Henry cartoon (question), later I write down a caption or overhear something and it gives it meaning (answer).

On a personal level, what's your artistic background? If any...
I studied Fine Art I have a BA and two MA’a and my mam says all I need now is another MA and an ALA then I’ll have an ALABAMAMAMA… it’s more funnier when you say it.
I’ve been called a dilettante I had to look it up coz I thought it meant ‘someone of French Aristrocacy’. But that’s okay I am a bit of a dilettante and maybe eclectic? I make films, not very good ones, must remember to take the lens cap off, write songs for the air guitar.

I have a film showing at the Star and Shadow weekend of 25th August called Helter Skelter, it’s weird as shit! It’s about a series of dreams I had, I love dreams, dreams are my main source of inspiration like a mixtape of poetry and you can recall them before the ink dries.
And I have an interactive art and sound smartphone app. released this month in collaboration with Foof productions, it’s called i-coda, download it and make me rich so I can record a crap solo album and buy a deckchair in Seaburn.

How did Gonzo Media get involved? Did you approach them or did they seek you out?
As I was asking for funding requests on the Henry Facebook page to get the ball rolling and my friend Martin Stephenson told me to get in contact with Rob Ayling from Gonzo Multi Media as they were looking for new book projects. I met Rob and he loved them and he passed me on to the editor Jonathan Downes to get Henry into a book.

I signed the book deal at a crossroads in Houghton le Spring? And the weather didn’t half change after that.

Who, or what, is Geordie Nettledyke?
When I was about 6-7 my dad used to come in the from the club half popped, he’d tell me about the exploits of a fellow Miner called Geordie Nettledyke from Nettlesworth, a kind of Mr Bean meets Andy Capp… he had great catchphrases like “half the lies I tell are not true” he would get up to all sorts of mischief.

When I was old enough to go to the club I asked my dad if I could meet him, he agreed to introduce me to this really funny guy. So I waited and waited he never turned up. Then my dad confessed he didn’t exist he created a fictional character as a vehicle for his jokes. I guess that’s what Henry is to me, if I didn’t have these well I would go insane and end up talking to an invisible Mr Nettledyke on a park bench swigging from a bottle of Lightning.

Do you have any plans any future Henry exploits? Henry on his holidays? Henry at the Olympics? Henry solves the banking crisis?
Next for the Henrys is an app. game, a Youtube animation show and…then I will unveil my plans for Total World Domination, the Nine Henrys are the Illuminati, Metaphysical Gangsters, the Nine God’s of Cheesey Bacon Flavoured Crisps, they are the Comte Saint-Germain rolled into one.

They are the future, in three years time there’ll be a Henryocracy… and half the lies I tell are not true.
Posted by Jon Downes at 10:12