DAWN OF THE DEAD: Bloody Magnificent! 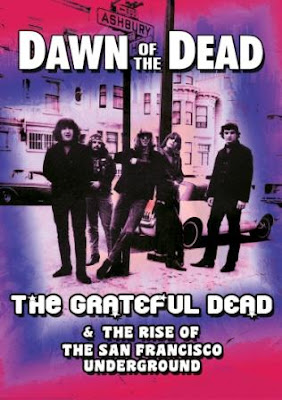 As regular devotees of this blog are probably aware, although most of what I write here is about things released by the magnificent Gonzo Multimedia, sometimes I jump ship and review things produced by other people that interest me, and that I think will interest you.

Note that last sentance please. I am particularly interested in the biology of Chinese civet cats, and breeding obscure South American cichlids, but I will confine my writings on these subjects to elsewhere.

I have been rather fond of the music of The Grateful Dead since the summer of 1976 when, with the money I earned from my first job (a whopping £12 a week) I went insane and bought enormous numbers of records. This was much to the chagrin of my parents who thought that I should have saved it . They were probably right, but the glorious twelve or so weeks between taking my O levels and finding out that I had failed most of them were a glorious vista of musical exploration.

Every week I would go into Braddick’s record shop in Bideford, which is now an undertakers owned by the same firm, and buy handfuls of whatever looked interesting. In that way I discovered Kevin Coyne, Elephant’s Memory, and The Grateful Dead – through a budget price double album collecting together 'Wake of the Flood' and 'From the Mars Hotel'. Here, if I may digress, it is interesting to note someone who bought this record was future prime minister, Tony Blair, who named his university band Ugly Rumours after something that could allegedly be seen on the cover.

I don’t like to admit that Blair and I have even slightly similar musical tastes, but last week it was announced that David Cameron’s favourite band is Pink Floyd and that Nick Clegg harbours a fondness for the music of Throbbing Gristle (I am lying on one of these counts).

Rob Johnston from Chrome Dreams is a jolly nice fellow, and has sent me several of his excellent DVD documentaries (or should I say 'rockumentaries', as I am in a Marti de Bergi mood) to review.

This – the wittily titled 'Dawn of the Dead; – is the third, and I am glad to say it is just as good as its two predecessors. I am really impressed with what this company does. There has long been a gap in the market for intelligent, witty, and informative documentaries of rock music, and as the practitioners of the great music dream of the 60s are now in or about their early 70s, this seems like a very sensible time to do what they are doing.

The Grateful Dead DVD, like its two predecessors, looks at its subject with aplomb and flair. It tells the story of the nascent San Francisco psychedelic theme, and – for the first time – I have actually heard music by bands such as The Charlatans, The Warlocks and Mother McCree's Uptown Jug Champions.

At the risk of committing an appalling sin of post-psychedelic apostasy, none of these bands were terribly good. Right from the beginning the artistic milieu that surrounded them – the light shows, the artwork, and the street theatre – was completely extraordinary. The music, however, at first at least, wasn’t terrible good, and even the earliest footage of The Grateful Dead wasn’t anywhere near as impressive as the footage of Jefferson Airplane, or Big Brother and the Holding Company. I guess you had to be there.

“I guess you have to be there”, is something which is said again and again when discussing the early days of the San Francisco psychedelic movement. Even such authorities as Ralph Gleason admit that, and – on Sunday night – for the first time I actually felt that I had been. There was more archive footage of be-ins, happenings, and free concerts in the park than you could shake a stick at, and I am ever likely to see again, and some of the insights that it gives about characters like Chet Lems and Bill Graham are extraordinary. The unexpurgated interchange of epithets between Graham and one of the major San Francisco users of the time was unforgettable.

Something that I had not realised was quite how may dodgy bedfellows the original hippy movement had. Its links with the Hell’s Angels movement (which is something we can come back to in a minute - are well known, but the fact that early Grateful Dead concerts took place in a strip club, and the fact that the moral leaders of the hippy movement found it necessary to warn young women arriving on Hight Street for the first time how to avoid gang bangs leaves somewhat of an uneasy feeling and a nasty taste in your mouth. As somebody who only became involved in the counter culture during the neo-hippy revival of the 1980s when the movement was almost fanatically non-sexist, non-racist blah blah blah, the levels of sexual exploitation that seemed to have been rife in the early hippy movement are unsettling. I have to admit that I found this last year when I was researching the early Oz magazines. Some of the things in them are completely inappropriate by today’s standards.

The real shocker was Altamont. This ill-starred festival has entered popular culture to such an extent that there was even a joke about it in an episode of Sabrina the Teenage Witch. I last saw saw Gimme Shelter some years ago and cannot my copy of, so am unable to compare its coverage of the festival with the coverage in the Chrome Dreams video. The fact that at least some of the coverage is credited to the Maysles brothers would suggest that it came either from the more well known film, or – at least – from the outtakes. However, I really cannot remember Gimme Shelter being quite so horrible as the segment that I watched on Sunday night.

It was one of the most scariest bits of footage I have ever seen, and even sat in my favourite chair with my elderly orange cat on my knee I was more than a little freaked out. This rendition of the Altamount story is no less than a masterpiece, and everyone responsible for this documentary should be commended. I cannot recommend it highly enough, and look forward to what turns up in my postbag from them next.