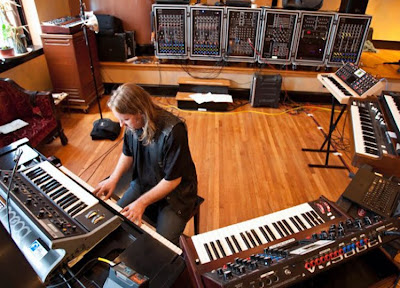 Jon: Are you planning to record with the Collective again in the future?

Erik: I don’t know. The purpose of the project was really to take songs from my catalogue and re-imagine them in his one singular production. Now I am kinda a prolific bastard and I have a lot of instrumental songs that I have written so to do a second volume there’s more than enough material to do that, so that’s a possibility.

It’s also a possibility to do something, God forbid, original and that would be for me and the guys even to write some new instrumental material in this style, this kind of synthesiser oriented progressive rock with some heavy rhythm section elements.

Obviously I like the prog metal guitar and drums going along with the more classic and vintage keyboard styles so in my music you’ll hear furious double kick bass drums and low tuned Mesa Boogie guitar and then beautiful Mellotron and grand piano and Moog synthesiser going over the top of that. That’s the sound I really like so it would certainly be possible to do some new music like that. So the future is open and I love working with the guys. We get along great both personally and musically and we still have this economic downturn here so studio time is cheap so who knows we may go in and do it all again.]

Jon: I like the way that it appears that you don’t think too far ahead with your career, and you just do all these different things. I think that’s fantastic.

Erik: You know, that’s something that I feel really lucky. As a musician you really want to be doing new things all the time. I mean it would be wonderful to be a band like Yes for example that has been around for 40 some years and all the opportunities that that provides, but you know bands like Yes really have to go out and play 'Roundabout' night after night don’t they? You can’t really go to a Yes show and have them play all new music. You would be disappointed if you didn’t hear 'Heart of the Sunrise' and even 'Owner of a Lonely Heart' or something like that.

John of course has his own take on the song and does it the way he’d always done it in his era of the band, but pulling it back into the conversation I really love the fact that I have so many opportunities to do things.

We have just released an album with my wife Lana Lane called 'Eldorado Hotel', which is her.... I am not even sure what number it is.. number 10 maybe, and that was just a fantastic experience. We think we did the recording in about 3 months, the writing had gone on longer than that of course, the writing and pre-production, and we used a lot of the current musicians that I’ve been working with...the guys from the Galactic Collective, the guys from John Payne’s band.

It’s very nice to keep music very ephemeral and fresh. I think it would be sad and frustrating as an artist if you had to sit in the studio and think, ‘Oh I have to do this album but I must be done by numbers, I must have a song like this and I have to make these fans happy, and I have to make this record label happy, and oh this journalist will give me a terrible review if I don’t do this.’

There are so many artists that are in that box and that would, I am glad I’m not, I am glad I have the freedom to keep doing new and exciting things, so I’m 44-years-old which is not all that old in the greater scheme, but in musician years that is pretty far along, but I feel there is opportunity to go on for years and years from here, and I hope it keeps going in the same way.