I first saw Hawkwind when I was 18, and I'm now in my 50s, and the surprising thing is that I still remember a lot of my gigs! At my first-ever Hawkwind event (1976) I remember thinking it sounded almost nothing like the few bits of albums that friends had lent me. That gig was a thunderous assault of blanga, and I couldn't make out a single word to any of the songs.

Hawkwind don't play quite so loud, these days, and stage PA gear has vastly improved in quality, so I was able to enjoy listening to elements of the music, rather than just spark up a spliff and mentally surf those waves of blanga. That was the old days.

So, Bridport. The opening night of the Hawkwind tour... and I'd taken up what's become a favourite spot of mine - at the front and close to the right-hand speaker stack. And (to quote from their latest album): Systems ready for inspection!

Support was ex-Hawkwind guitarist Huw Lloyd-Langton. Always a favourite with the crowd, he's an unlikely-looking performer. Frail and untogether (he forgot a song name, for instance, but reassured us that it would come back to him) he noneless did the biz. It was a solo acoustic set but some of us were surprised when Dave Brock joined in on one number. Being Hawkwind fans, though, we just took it in our stride and carried on enjoying the show! 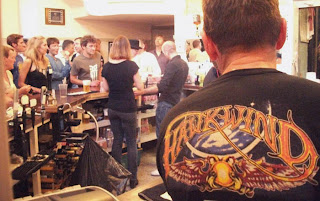 There was a hugely long interval before Hawkwind (well, it seemed that way to me) but since there was a long wait at the tiny bar, that was just as bloody well, as it turned out.

Making my way back down to the front, I was in time for the start of the Hawkwind show.

The initial sounds and also the lighting scheme strongly resembled the start of the 2008 shows but Mr Dibs' electric cello added an extra dimension... after which he started narrating the space poem "The Awakening". This dates from the earliest few years of Hawkwind and I felt a tingle up my arms, which developed into a full-blown shiver as this, my favourite narrative, progressed.

That's a VERY good sign as, believe me, my goose-pimples are fussy bastards and they don't accept just any old Hawkwind gig. It takes something special to wake them up.

Mr Dibs bow-scraped while he narrated, and then the band launched into "You'd Better Believe It" and the lightshow intensified, and, well, Hawkwind are in town again!

Stuff from the new album "Onward" and tracks like "Southern Cross" took up the next 20 minutes. There were no dancers at the Bridport show but Hawkwind had one guest: Dead Fred (ex ICU and member of Krankschaft) who lurked behind Tim Blake over on the left, and I'm sorry to say I didn't spot him playing keyboards at all, from where I was - over on the right and headswirling and drinking lager. I only found out afterwards.

The next number was their "big bass" sound and which they like to call "Assassins of Allah". Old buggers like me still call it "Hassan i Sahba" but never mind.... it's the one with the chorus-line "hashish..hashish..hashish..hashish", and that possibly tells you all you need to know about that number!

Hawkwind have dropped "Angels of Death" from their set, and "Hassan i Sahba" seems to be the replacement, the one that seeks to thrash the audience with bass frequencies and swooshes and theramin. Fine by me.

By way of contrast, a Brock ballad from the mid-1990s, "Love in Space", made a welcome return to the setlist, and Dave Brock sang the vocals on this one. 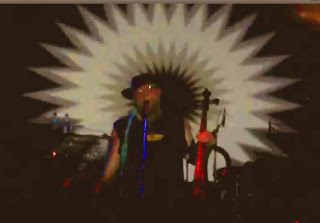 I wonder if, when sci-fi writer Michael Moorcock penned "Sonic Attack" for Hawkwind over 40 years ago, he realised they'd still be performing it at gigs in 2012?

Originally performed as a Robert Calvert apocalyptic narrative, this track has gone through more changes than almost any other Hawkwind track. In 1981 it had a malevolently-leaden beat and a thunderous assault of other instruments over it; the 1990s renditions used sirens and swooshes as background; it's even been done as a ballad (2007); and on this tour the strangely-dressed Mr Dibs, wearing kinky boots and a skirt, provides the main effects on his electric cello while Richard Chadwick did the percussion.

The dark stage and the 'zap' visuals just add to the sense of power on this one... and it also hid the kinky boots from sight, so there.


(I stole the above screenshot from a youtube video of Hawkwind doing Sonic Attack in Cork a couple of nights later. To atone for my sins, I'll tell you the link to the video clip is here.)


It runs into a thoroughly excellent instrumental which I gather is called "Cities" and has more blanga per square metre than anything they've done in a long time. It's grungy heads-down-and-shake Hawkwind of the oldest of old space rock schools, and it gave me my second tingle of the night...

Anyone wondering how Hawkwind could follow that soon found out, when we had the "Assault and Battery" / "Golden Void" / "Where are they Now" sequence. I'd had to go off for a pee during "Prometheus" and I found the aisle blocked on my return, so I watched the performance of this "Warrior on the Edge of Time" classic from near the back of the hall, rather than barge through people who were swaying and drifting to one of my most fav fav tracks.

I do sometimes enjoy the view from the back, because one can see the whole stage and the lightshow. But on this occasion I did scurry forwards as soon as I decently felt I could, and was just in time for "Damnation Alley" as I arrived back at the speaker stack area. (Cheers to Julie for keeping my place!)

This track was a hot version, with Nial Hone using effects pedals - and maybe I can comment at this stage that Dave Brock seems not to use any effects pedals at all, these days. I could see his and Nial's feet all through the show and it was Nial that did all the fancy footwork. And here we had some nice wah-wah effects during this blanga thrash with Mr Dibs on vocals and Tim Blake doing some keytar runs, and that song ended the main show 10 minutes later.

Big cheers from the audience, and some of the traditional foot-stamp, and then the band were back for Dave Brock to tell us (via his loud guitar intro) that this was "Psychedelic Warlords". Damn, it's good to hear Brock's guitar loud. Some gigs in the past, it's been mixed really low!

Anyway, it was over all too soon (isn't it always, at a good HW gig) and I'm getting ready for their Southampton show, in a few days!

Anyone who though Hawkwind had lost their way a few years back, and who thought they were easing off the gas pedal and settling down for a graceful drift into retirement had better think again. The sonic warriors still kick ass - and now they're doing a superb job of it. I'm not going to descend into hyperbole and say they're as good now as they have ever been - but I did feel that, at times, they were strongly tilting that way.
Posted by Graham Inglis at 21:00