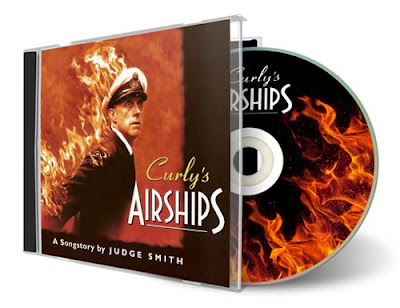 The other evening I finally got around to listening to Curly’s Airships by Judge Smith.

Before I go any further, I would explain why I use the term “finally got around”. I receive a lot of books, records, and DVDs to review, both as a rock music historian/journalist, the editor of a UFO magazine, a keen naturalist, and a director of the Centre for Fortean Zoology. At any one time, I might have twenty of each awaiting my perusal.

Some of these, without any disrespect at all to the artists or authors concerned, can be combined. I can listen to instrumental music whilst reading a rock biography or a book on freshwater biology, but when it comes to a DVD, or a project like Curly‘s Airships which demands that you not only concentrate on the words and the story, but – if you are me – have to refer intermittently to the libretto and liner notes, then it is an undertaking which requires 100% of your attention.

When, like Curly’s Airships, it is a massively complex, two CD set lasting the best part of two and a half hours, and your life is as complicated as mine is half of the time, it is difficult to find a couple of hours where you can just sit down and grok something as complex and as demanding as this.

I often have a houseful of people; friends, relatives, colleagues, acquaintances, and people that I have met on line that sound interesting, and once again – the presence of these folk delightful as they are all – precludes quite a lot of reviewing of this type. There are few people to whom one can say, “um, do you mind if I put on a two and a half hour concept album by various members and ex-members of Van der Graaf Generator about airships, which ends up with the main protagonists being burnt alive? And, by the way, I have an ear infection in one ear and I’m going deaf in the other so I will have to play it loud!” You see what I mean.

But, finally the other night, I got around to it. And golly, was it worth the wait.

I seem to have come at my investigation of Judge Smith all backsy’vore as they say in Devon. He has recorded three song stories to date, Curly’s Airships (2000), The Climber (2010), and Orfeas (2011) and – me being me – I seem to have listened to them in reverse order. Curly’s Airships is the heaviest of the three projects, and I use the term both musically and within its socio-cultural turn of phrase within hippy argot. It is the longest, it is the most complex, it has the most guests, it is the only one that can really be described as pure 'rock' music, and is the nearest to what you would originally think of as a solo project from an ex-member of Van der Graaf Generator.


Here it should probably be said that Judge left the band quite amicably after the first single, and has remained friends with the people involved (most of whom appear on Curly’s Airships) ever since.

Musically the main instrumentation comes from Hugh Banton’s collection of organs, which include the organ of St Agnes Church , Liverpool which he built himself in 1996. He also plays three electric organs and three other church instruments, one built as long ago as 1827. The whole thing is underpinned by drums and bass provided by Judge himself, most of which, I gather, are electronic.

On top of this, there are guest appearances from David Jackson and Peter Hammill of Van der Graaf Generator, one of my favourite guitarists John Ellis (The Vibrators, Peter Gabriel Band, The Stranglers, and The K Group) and lots of guest vocalists including two of my all time favourite singers Arthur and Pete Brown (as far as I know no relation at all). The libretto tells the story of Curly McLeod, a junior officer in the Imperial Airship Service, caught up in the British Governmental SNAFU that was the Imperial Airship Scheme. Curly is fictional, most of the rest isn’t. The story traces the social, governmental and political shenanigans and intrigues leading up to the 1930 R101 disaster and features such supporting cast as Barnes Wallace, the dude who invented the bouncing bomb made famous by the Dambusters in that movie where they are not allowed to mention the name of Guy Gibson’s dog.

Both lyrically and musically, this opus is magnificently complex and works on a number on a number of different layers. I am not even going to pretend that on a quite intense listening the other night I took in more than a fraction. To me, at least, this has more in common with The Fall of the House of Usher project started by Judge with Peter Hammill in around 1973 and finally finished in 1991 (with the whole project being re-worked in 1999) than it does with the two subsequent song stories. This is fantastic stuff. (Not that the other two aren’t, they are just completely different to this).

Ever since pop musicians realised that they were no longer constrained to a rigid verse/chorus/verse/middle eight format and a song length of two and a half minutes (in about 1965) artists within the rock music idiom have been attempting long form projects, some have been more successful than others. Some of the ones which the rock music establishment on the whole have considered to be a success I disliked intensely, and others which (like Deep Purple’s Concerto for Group and Orchestra) that most people have relegated to the dustbin of history, I thought were rather good. But there is no ambiguity whatsoever about my attitude towards Curly’s Airships. It is magnificent. And what makes it even better is the lavish packaging, including a full libretto, working notes about the musical structure, and even a nicely written and rather scholarly history of the Imperial Airship Scheme complete with full bibliography. I cannot think of another project within rock music that is so intelligently and eruditely presented. In fact, I can’t think of another project within rock music that is so intelligent and erudite.

One of the things that is so impressive is how, within a relatively simple harmonic and instrumental structure of drums, bass and organ, he manages to evoke so many emotional responses, and conjur up so many moods. However he did the same thing on The Climber with just a string bass and a bunch of dudes singing, so I guess that I shouldn't be surprised.

This is a bloody fantastic record, and I will be talking to Judge about it in the weeks that follow. But I need to listen to it again once or twice.