MY POSTBAG: Beefheart and Shellshock 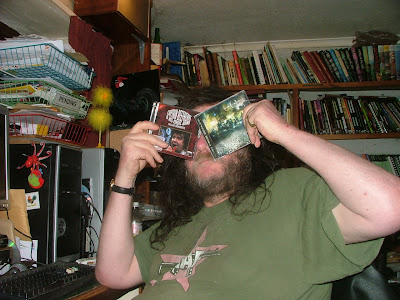 And so we come to yet another postbag feature during which your humble editor poses ridiculously with the latest goodies that have arrived courtesy of those jolly nice people at the Royal Mail. Today we have a Captain Beefheart DVD and a CD from a band called Shellshock who look very interesting, but about whom I know absolutely nothing at all.
By the way, just in case you thought that:
a. I only own one TShirt
and
b. Goodness me, the post arrives on sundays in North Devon,
...the last three Postbags actually arrived on the same day, but I didn't have enough hands to hold them all, and as remarked previously the Gonzo big cheese is too stingy to pay for me to have expensive experimental surgery involving octopus DNA, in order to have various extra arms...
Posted by Jon Downes at 12:17