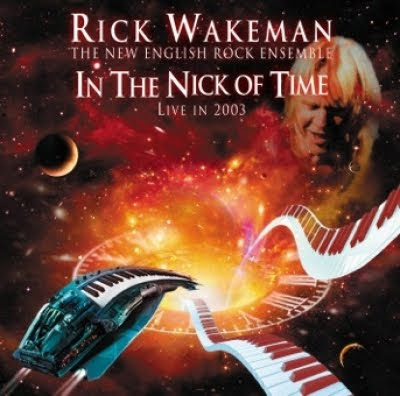 http://rootstime.be/
Rick Wakeman is the now 63-year-old keyboard player and songwriter of the British progressive rock group 'Yes'. He also for several successful solo projects and landed regularly in the recording studios as a session musician for several major artists like David Bowie (among other things on his hits "Space Oddity", "Changes," "Life On Mars?" And "Absolute Beginners") or Elton and John T. Rex.
After being in 1969 with the folk group 'Strawbs' to his music career began, he ended two years later behind the keys of the keyboards on 'Yes' and he played a leading role in the production of legendary albums like "Fragile" "Close To The Edge" and the live album "Yessongs".
Afterwards, it went like a yo-yo with his career with the group, where he regularly left his colleagues to work on solo material, but just then his steps to return as a permanent member of 'Yes', something he had about five times performed in the past 40 years.
His solo work was also very successful because he sold more than 50 million plates. The most famous solo albums are "The Six Wives Of Henry VIII" from 1973, "Journey To The Centre Of The Earth" from 1974 and "The Myths And Legends Of King Arthur And The Knights Of The Round Table" from 1975, each grand orchestrated productions around a historical theme or around legendary literature. During this very busy years, Rick Wakeman also not less than three times the victim of a heart attack.
The latest album from Rick Wakeman now on the market has come a live album recorded in 2003, the period when his former album "Out There" was to promote. Together with 'The New English Rock Ensemble' was the album "In The Nick Of Time" recorded during that time tour. Now the master tapes from the dusty archives and turned up in a beautiful digital version put on CD.
Seven songs that together account for slightly more than an hour Kicking music by the genius Rick Wakeman was composed. The most famous numbers in each overflowing tracks "Catherine Parr" and "Beware Your Enemies" from his CD "The Six Wives Of Henry VIII," the 13-minute title track from his then new album "Out There" and a ten minute long song "The Cathedral In The Sky" from the same plate.
In addition, they bring the title track of the progressive rock album "No Earthly Connection" from 1976, "Dance Of A Thousand Lights" from "Journey To The Centre Of The Earth" (a song on the original CD version by rock singer Bonnie Tyler was singing ), title track "White Rock" from the eponymous album from 1977 and "Wurm", a song from the 1971-album "The Yes Album" that three years after it played here was officially on board appeared with the release of Rick Wakeman's solo album " Out Of The Blue "in 2006.
The virtuoso keyboard work of Rick Wakeman on keyboards is the common thread throughout these seven songs and no more sublime, bombastic and theatrical vocal contributions from Ashley Holt disappears while rush into anything. Ant Glynne now plays his soul from the body electric guitar, Tony Fernandez is the drummer of service and Lee Pomeroy picks are calluses on the fingers on the strings of his guitar hard.
"In The Nick Of Time" should definitely belong in the record collection of every true 'Yes' and Rick Wakeman fan. The progressive rock album you will enjoy a pleasant hour and bring you there's not enough of it, then simply press the replay button to everything one more time to advance to relive.
Check out his Gonzo Artist Page
Posted by Jon Downes at 09:04