CHRIS SQUIRE: I'm sure there's a good possibility we could do something together in the future." 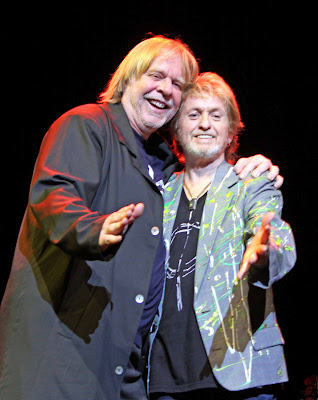 Chris Squire rarely takes no for an answer. After all, he's a Yes man, seemingly forever.

That's Yes with a capital "Y." A founding member of a group so progressive that the label "prog rock" wasn't even invented when the group formed in 1968, Squire continues to persevere long after others have come and gone.

The steady-handed bassist in an ever-changing British lineup of synth-laden, guitar-driven classical rock isn't averse to having an old-fashioned reunion, though. Squire leaves the door open to working with fellow co-founder Jon Anderson, the band's first singer, who departed because of respiratory problems that led to a cancellation of their 40th anniversary "comeback" tour in 2008.

"Of course, he would want to have to do it," Squire said during a recent phone conversation while dealing with triple-digit heat in Phoenix, his American home when he isn't living in London. "But it would be probably a little bit different. Because I'm not sure if he'd be up for doing the hard slog, a long rock 'n' roll tour, at this moment. But I'm sure there's a good possibility we could do something together in the future."

Being the cordial chap that he is, Squire doesn't rule out any possibilities.

"Well, the funny thing is that more by default than desire, I've sort of been there the whole time," he said. "And various other members like Jon and (keyboard whiz) Rick Wakeman, for instance, have been in, they've been out, they've been back in, they've come back again. So, it's really par for the course with Yes. That's sort of a pattern. I wouldn't object to working with any former member of Yes, really."

Read on...
You want to find the Gonzo artist page for Jon Anderson? Of course..
Posted by Jon Downes at 23:02